LeBron: I Want Kevin to Shoot the Ball with More Confidence 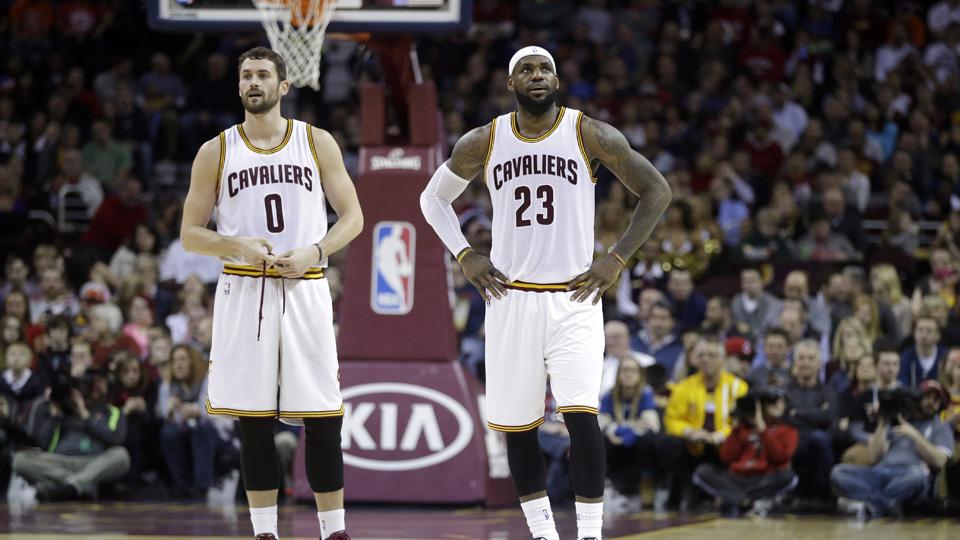 After the Cleveland Cavaliers’ 97-84 win over the Philadelphia 76ers on Monday night,  LeBron James‘ commented about the confidence level of teammate Kevin Love after the power forward scored a season-low five points, hitting just one of his seven shots from the field and taking no shots after the first quarter.

The victory was the team’s 11th in a row, with the streak at least temporarily setting aside team chemistry issues that were evident in the first few months of the season.

Quoted in an ESPN article, James said about Love’s numbers in Monday’s postgame locker room, “I think Kev had some shots that he passed on. Maybe he felt he just wasn’t in a good rhythm, but I know I hit him with a few shots after the first quarter.” James then went on to add, “I think his confidence maybe shooting the ball is a little down, but for me as a player, I get him good looks. I want him to shoot the ball and he needs to shoot it with confidence.”

Not surprisingly, Love disagreed, saying, “Maybe one look, but it was more so on a swing-swing to (Matthew Dellavedova). I think a guy was closing out on me and I hit Delly and Delly didn’t end up shooting it. But, no, I think I had some good looks in the first quarter—a couple of tip-ins I missed. (Timofey Mozgov) and I both went for the lob, I thought I had my hand on it, and missed that one. But, you know, getting good looks there. Not for lack of confidence, no.”

Love’s contributions during the winning streak are down from his season numbers, with those numbers down from his days as a member of the Minnesota Timberwolves. Love is averaging 13.9 points per game in his past 10 contests, as opposed to his 16.9 season numbers and 26.1 during his Minnesota career.

Love also discussed his role on the team saying, “I’m just doing what’s been asked of me. I’ve been keeping my head up and positive, glass half-full.” Noting his work on defense, an area he has been criticized about before, Love said, “I’m just trying to impact the game in other ways as best I can. I think tonight I did that on the defensive end.”

Kyrie Irving, the other member of the team’s “Big Three,” noted that Love continued to aid the team despite the rough shooting night, saying, “It’s a team basketball game. He was doing all the little things in order for us to win.”

Despite his seeming criticism, James pointed to the mantra he’s been preaching all season of individual sacrifice for the betterment of the team. “You want to win and you sacrifice whatever you need to do to help the team win,” said James, who added, “It doesn’t matter about shot attempts. It doesn’t matter about how many touches you get. I don’t need to shoot the ball at all, because I’m about winning. That’s all that matters.”

The comments could begin renewed talk among the national media about Love’s status with the team past this season. He’s eligible to become a free agent, but has said on multiple occasions that he plans on signing a maximum deal with the Cavaliers after the season ends.