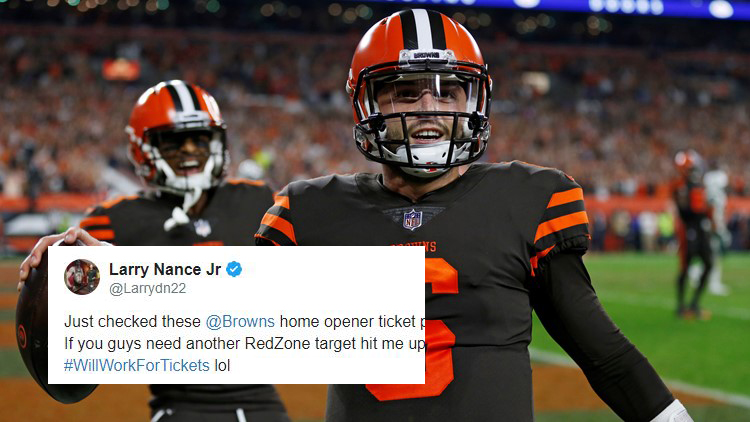 The Cleveland Browns have gone from being NFL basement dwellers to becoming one of the most exciting young teams in the league.

With stars like Baker Mayfield, Odell Beckham Jr., Myles Garrett, and Nick Chubb, the future seems very bright indeed. Perhaps that’s why Cleveland Cavaliers star Larry Nance Jr. is asking someone to help him afford some tickets to the Browns’ home-opener against the Tennessee Titans this weekend.

Nance isn’t wrong about the prices. At the moment, the cheapest nosebleeds available at FirstEnergy Stadium is around $108. The most expensive tickets are close to four times that amount.

Nance grew up in Cleveland and is a true diehard fan of the Browns despite decades of pain and suffering. That fandom was on display earlier this summer when Nance took several Cavs rookies to Browns training camp one day. Now, he might be thinking about asking those same rookies to use a bit of their rookie deals to purchase Nance a couple tickets for the game.

Whether Nance is in the stands or not on Sunday, the Browns will surely look to get their 2019-20 season off on the right foot.