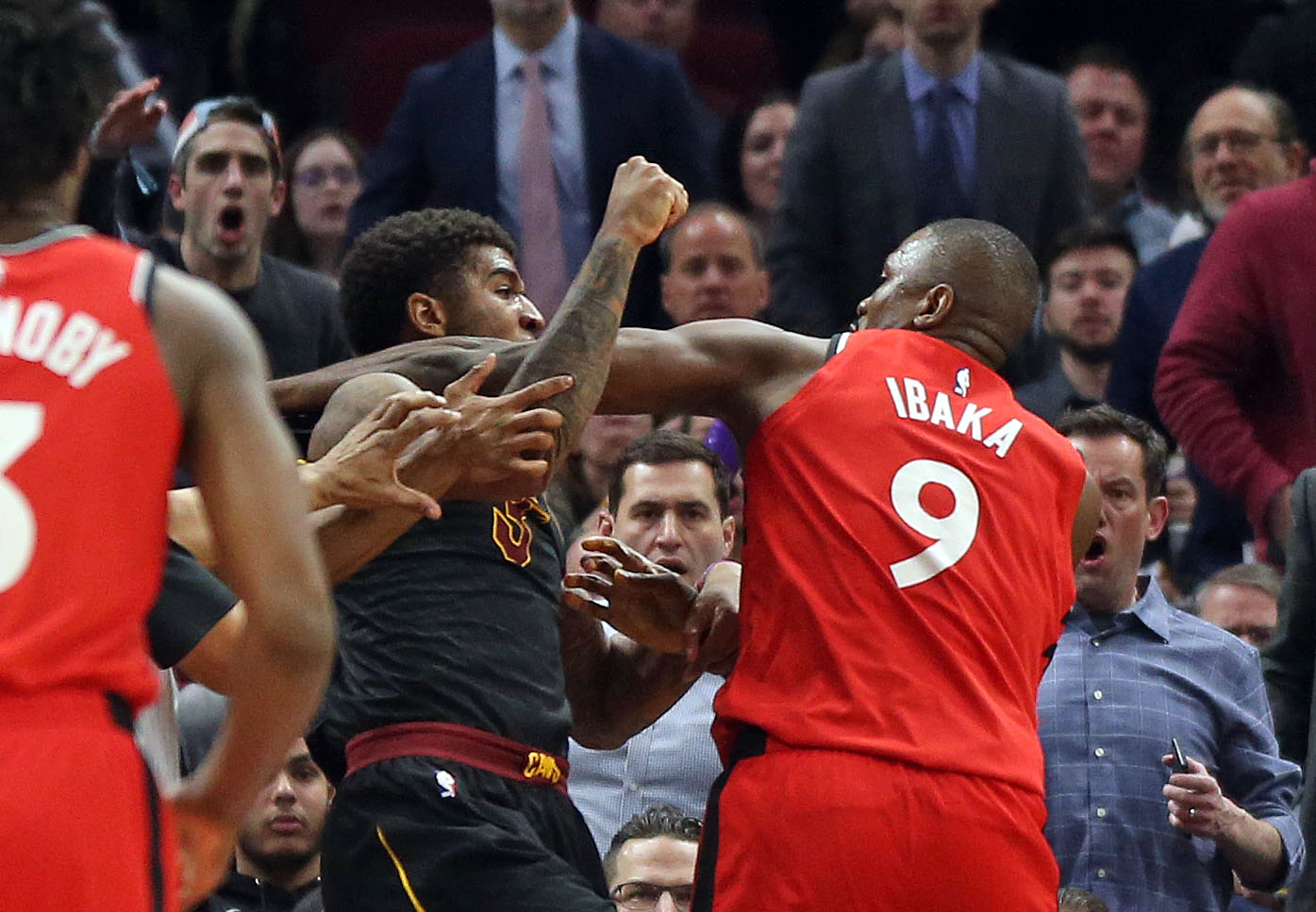 Even though the Cleveland Cavaliers used an explosive second half to thrash the Toronto Raptors 126-101 on Monday night, much of the talk centered elsewhere.

That was connected to the wild fight at the end of the third quarter involving the Cavaliers’ Marquese Chriss and the Raptors’ Serge Ibaka.

In those closing seconds, Toronto’s effort to get off one more shot before the buzzer led to Ibaka flopping while battling for position with Chriss. With Ibaka on the ground, Chriss made a remark to him and began walking away.

At that point, Ibaka charged him, grabbed him by the throat and pushed him, with a wild punch missing. Chriss then threw a punch of his own and the two players were immediately ejected.

Since neither player was available for comments, it was left to others to explain the chaotic scene. The Cavaliers’ Brandon Knight was closest to the melee and said it was simply a case of self-defense on the part of Chriss:

“He had to defend himself. What else was he supposed to do?”

“I mean, I don’t condone fighting at all, but I think if somebody comes at you, you have the right to defend yourself. I have to go back and look at the tape to see exactly what happened, but I don’t believe there’s a place in our game for fighting. In the heat of the moment I understand that things do happen. If you get in a situation where clearly you’re being attacked, your natural instinct is going to be to defend yourself. I’m not sure what happened, I’ll go back and take a look and it and then I’ll make a judgment on that.”

Cavaliers power forward Kevin Love noted that Toronto’s past playoff frustrations and the fact that they were losing by 14 at the time may have sparked Ibaka’s anger, Love explained his status on the bench at the time relegated him to spectator status for the scuffle:

“I stepped and saw it and it happened so fast you almost, everybody almost wants to run out there and take a look at what’s going on, so out of the corner of my eye I saw it. It was broken up quick and that’s usually how it goes.”

Love was proud of the Cavaliers for their ability to stay focused, outscoring the Raptors 35-24 in the fourth quarter:

“You never want to see that, but I think the fact that we kept our focus and kept our foot on the gas was key in tonight’s win.”

Raptors center Marc Gasol was one of the few teammates of Ibaka to offer a comment on the fight. He chalked it up to the emotional aspects of the game.

“Obviously I was on the bench at that time. It’s an emotional game. Sometimes things happen. It’s a contact sport and you say the wrong things and emotions build up and sometimes it explodes.”

While both players can expect to be suspended for at least one game, it’s likely that Ibaka will receive a stiffer suspension. That’s because his past history has seen him throw punches at other players before.

The victory by the Cavaliers improved their season record to 17-50, with their next contest scheduled for Tuesday night in Philadelphia.