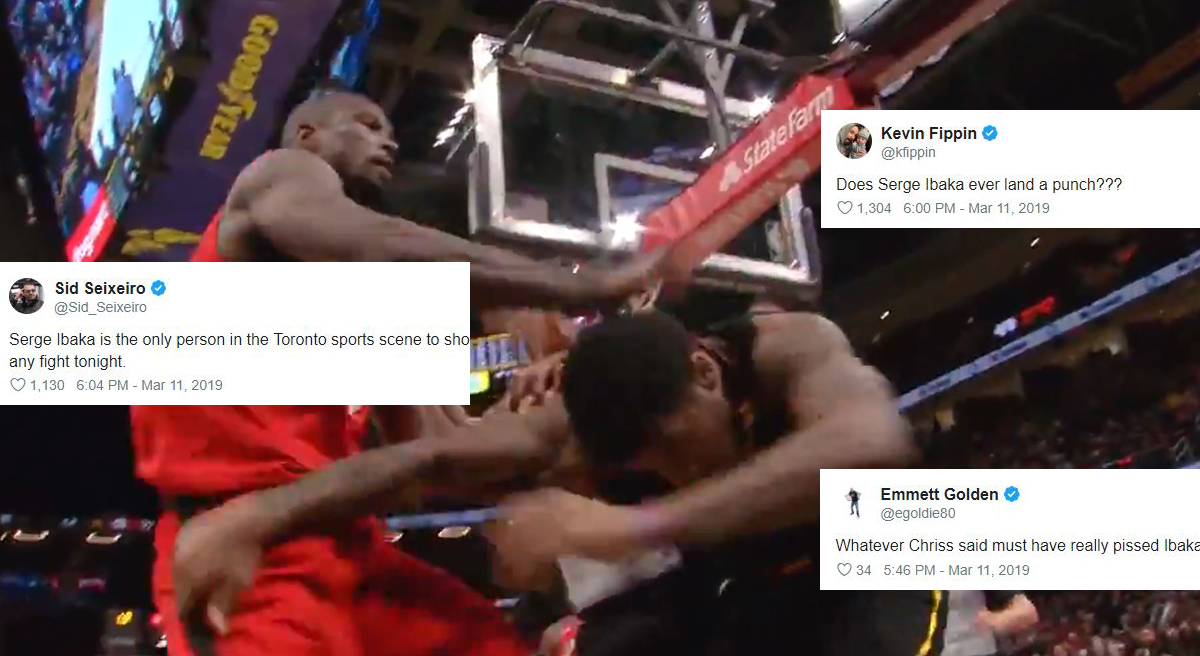 Fireworks erupted at the end of the third quarter of Monday night’s game between the Cleveland Cavaliers and Toronto Raptors when Cavs forward Marquese Chriss and Raptors big man Serge Ibaka got into an on-court brawl.

It started with Ibaka putting his hands around Chriss’ throat and culminated in the two exchanging punches before being thrown out of the game.

It wasn’t long before fans took to Twitter to express their feelings towards the fight.

YOURE TOO CLOSE MAN pic.twitter.com/Ivt7fI5pGB

Whatever Chriss said must have really pissed Ibaka off

Always say I’ma mind my business but this is legit how I look when things pop off pic.twitter.com/OzF4aHAWWz

Watching Serge Ibaka and Chriss going at it pic.twitter.com/cWUU5AQ8BL

Me right now watching Marquees Chris and Serge Ibaka throw punches at each other. pic.twitter.com/7Qh9E5W0ps

When Serge Ibaka tries to cave in Marquese Chriss’s face right in front of you. pic.twitter.com/Y9Qf4Q9hqK

Serge Ibaka is the only person in the Toronto sports scene to show any fight tonight.

It was at this moment when Marquese Chriss realized that Serge Ibaka is not the one… pic.twitter.com/QT3bwPmS7H

Does Serge Ibaka ever land a punch???

They just met and would you run up on serge ibaka all willy nilly? https://t.co/6MCpULHy0f

What was lost in the scrum was that the Cavs held up to win the game in a dominant fashion, 126-101.

The Cavs have now won six of their last 11 games and are clearly going to finish the 2018-19 campaign in a much stronger fashion than how they started it.