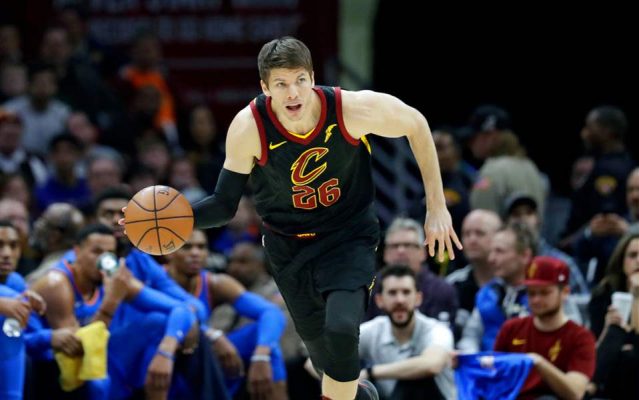 The turnover of the Cleveland Cavaliers‘ roster from last season began when LeBron James decided to sign with the Los Angeles Lakers as a free agent earlier this month, but that might have just been the beginning.

According to a Terry Pluto of the Plain Dealer, the Cavs are now looking to move veteran shooting guard Kyle Korver:

Pluto went on to explain that Korver could be an attractive option for James’ new team in Los Angeles:

“Korver would help the Lakers, who need shooters to surround LeBron James,” he wrote. “But they keep adding iffy outside shooters: Rajon Rondo, Lance Stephenson and JaVale McGee. So who knows what they are planning.”

Korver was originally traded to the Cavs in 2017 in exchange for Mike Dunleavy, Mo Williams, cash considerations, and a protected first-round draft pick. He went on to average 10.7 points on 48.7 percent shooting from beyond the arc in 35 regular season games. He contributed in the 2017-18 season as well, though his numbers did take a bit of a hit.

Ever since James’ departure from Cleveland, there have been multiple reports regarding the uncertain future of several players currently on the Cavs’ roster.

While it is unclear what the Cavs truly plan to do with their roster in the remainder of the offseason, it is clear that they are keeping their options open.