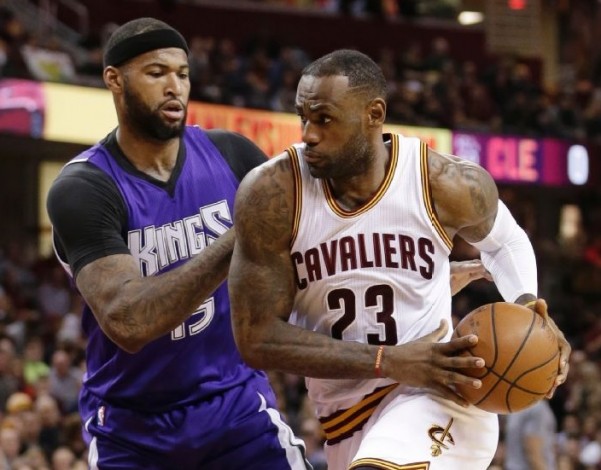 (Cleveland, OH) – Fueled by a triple-double from LeBron James, the Cleveland Cavaliers coasted to a 120-100 victory over the Sacramento Kings at Quicken Loans Arena on Monday night.

James, who scored 21 points, grabbed 10 rebounds and handed out 10 assists to get his first triple-double of the season. It was the 54th of his career, with 40 of them coming in a Cleveland uniform. He combined with Kyrie Irving and J.R. Smith to score 75 points on the night. Irving added a double-double and led all scorers with 32 points and 12 assists, while Smith contributed 22 on the night, with the Cavaliers collectively finishing the night with 27 assists.

Asked after the game about his thoughts concerning his triple-double, James credited his teammates as the inspiration:

“It’s a great stat for myself,” James said. “My teammates allow me to do that and I try to bring it home for them.”

Cleveland head coach Tyronn Lue noted how Irving’s health is back, but how he can get even better:

“I think healthwise, he’s 100 percent,” Lue said. “But I still think he’s getting his legs back.”

Kevin Love returned to the lineup after sitting out Saturday’s game and contributed 11 points and six rebounds in nearly 28 minutes of action, with Richard Jefferson also reaching double figures off the bench with 10 points. Meanwhile, James had help sweeping the boards with Iman Shumpert grabbing 11 and Tristan Thompson collecting 10.

Lue was asked about Shumpert’s increased numbers in the rebounding category:

“We talked about our guards not locking out and instead coming back to get rebounds.”

Speaking about the increased contributions of Irving and Smith, James offered high praise:

“Those guys have great rhythm right now,” James said. “Kyrie’s been in attack mode, and J.R.’s taking every shot. We want him to take every shot when he has a look.”

The two teams spent the first 10 minutes of action battling back and forth, with the Cavs taking the lead for good at 7-6 on a James layup with just under three minutes gone in the game. The Cavaliers began to make their move in the final two minutes of the opening quarter. At that point, they led 24-21, but were able to bump up their advantage to eight by the time the quarter ended.

During the second quarter, they pushed the margin to double-digits for a good portion of the period, leading by as many as 18 before heading to halftime with a 61-45 advantage.

The Kings got no closer than 13 during the third quarter, which serves as a step forward for a Cavaliers team that has recently struggled coming out for second-half play. With 2:36 left to play in the third, they took their largest lead at 88-64 following Smith’s sixth three-pointer of the evening. The rest of the game was essentially garbage time.

Smith joked in the postgame lockeroom about reaching a career milestone of 1,600 three-pointers:

“My dad texted me and told me he wanted the game ball, but some guy had his 40th triple-double or something like that.”

The recent contributions of the big men in the frontcourt were the subject of a question to Lue:

“Our bigs have been doing a great job of paying attention to details.”

The Cavs improved their season mark to 37-14, while Sacramento drops to 21-31 on the year.

James spoke about how this game was a positive step forward:

“We want to continue to get better and play as close to a 48-minute game from start to finish,” James said. “I think for the most part, we did that tonight.”

Irving added how the team is making strides with each game:

“I think we’re all starting to settle in our roles,” Irving said. “As a point guard we just have to find an offensive package we can work under.”

Just one more game remains until the Cavaliers (with the exception of James) take an eight-day rest for the All-Star break. That contest will be a home matchup against the Los Angeles Lakers, a game which will tip off just after 8 p.m. ET since it will be nationally broadcasted by ESPN. The contest will mark Kobe Bryant’s final trip to Quicken Loans Arena.