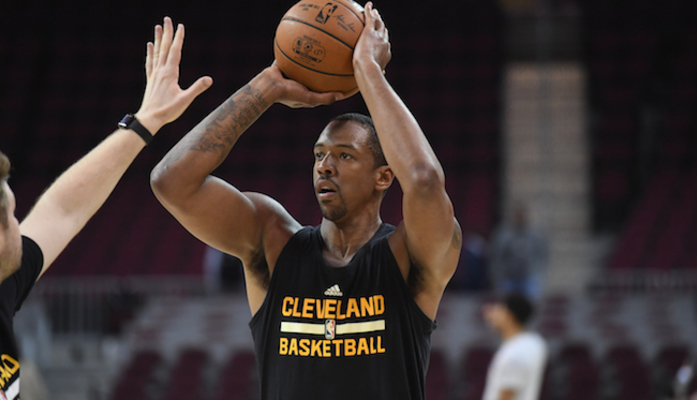 There aren’t many players on the Cleveland Cavaliers who get the same coverage as LeBron James, Dwyane Wade or Kevin Love. While the All-Stars deserve the attention, there are others who put in just as much as work.

Perhaps one of the hardest working players is Channing Frye, who gives the Cavs a nightly punch off the bench. Yet, with all the additions to the team this year, the big man has seen his numbers sink from 9.1 points a game last season to a near career-low 4.5 points this year. Still, the 6-foot-11 forward is finding ways to make himself useful on the floor and contribute to winning.

After playing a mere 12 total minutes in the 2017 NBA Finals against the Golden State Warriors, Frye had concluded it was time to make a change. The tall tower spoke to Chris Fedor of Cleveland.com about how he is trying to evolve his game this season:

“Yeah, I have to stay who I am, but also I have to do other things,” Frye said. “I look at the game like, ‘How can I impact it not just standing there?’ Just try to be active offensively setting screens, doing stuff like that, but I’m also trying to be active driving the ball to the hole, finishing, one-dribble pull-ups and stuff like that. Just playing ball and not being robotic. Just evolving.”

Although the 12-year pro has been known for his superior three-point shooting with an average of 38.8 percent from downtown for his career career, the big man is sacrificially finding different ways to impact the game. Though the Cavs hit a whopping 20 triples against the Atlanta Hawks on Tuesday night, Frye didn’t contribute to that total at all. In fact, the three-point specialist didn’t even attempt a shot behind the line.

Despite Frye’s three-point percentage (31.9 percent) tanking this season, his field-goal percentage (51.1 percent) has never been better. The veteran is shooting 18-of-21 (85.7 percent) in the restricted area and is 12-of-20 (60 percent) on midrange jumpers, only missing five shots all season from inside 16 feet. The other ways Frye has contributed has enabled other teammates, like Kyle Korver, to thrive. Cavs head coach Tyronn Lue boasted about Frye’s unselfish impact:

“Just having him on the floor, the chemistry that him and Korver have together in that second unit is unbelievable,” Lue said. “Channing’s gotten better at passing the basketball in split action. When he catches it, he has a half shot right to the DHO (dribble handoff). Just his activity and movement with him and Korver together has been great for us.”

The Cavs take on the Los Angeles Lakers next on Thursday night shortly after 8 p.m. ET.