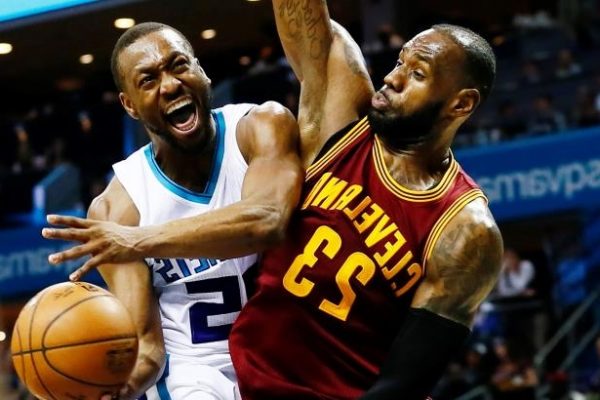 The Cleveland Cavaliers are just over 24 hours away from potentially selecting a player with their eight overall draft pick in the 2018 NBA Draft. However, if they want to keep LeBron James in Cleveland past this summer, they might need to trade it away for an established star.

According to NBA insider Ian Begley of ESPN, an example of an established star that could entice James to re-sign with the Cavs is current Charlotte Hornets point guard Kemba Walker.

“I just think you have to trade for a point guard who can make things easier for everybody on the court, including LeBron,” Begley said during an appearance on the “Bull and Fox Show” on 92.3 The Fan.

He went on to discuss Walker’s availability.

“Kemba Walker was dangled by Charlotte before the trade deadline,” he said. “If you could somehow land a player like him in a trade prior to the draft … shortly after the draft, I certainly think that would impact LeBron’s thinking.”

Begley continued to express his belief that while the Cavs could certainly draft a talented youngster with the eighth overall pick, none of them would be enough to make Cleveland a more attractive destination than it currently is for the four-time MVP:

“I don’t think there’s a player that Cleveland could take in the draft that LeBron says, ‘Oh my goodness, I have to play with this guy. I have to re-sign with the Cavs.”

On the adverse side, he did say he believes there are players that the Cavs could trade for to increase their chances of re-signing James:

“I think there are players available via the trade market that would really entice LeBron to stick around.”

Begley then offered an inside look into the Cavs’ front office, saying he’s sure that Cavs general manager Koby Altman is exploring all possible options to ensure that James remains in the Wine and Gold.

“I have to think that Koby Altman is working hard right now to try to put something together to make an impact,” Begley said. “It’s not just that draft pick, that first-round pick. But it’s an additional move, a trade that lands a strong contributor on that Cavs roster.”

Still, regardless of what Altman and company do, Begley admitted that it still could not be enough to keep King James around.

“It’s just such a tricky to position to be in, though. I feel for the management team over there,” Begley said. “Just because there’s so much uncertainty. How do you make a potentially franchise-altering transaction without knowing what LeBron is going to do?

“So, (it’s) certainly not an easy position for Koby Altman and those guys to be in and I don’t envy them.”

It’s quite clear that the Cavs are likely going to have to take quite a few risks in an attempt to keep James around. Hopefully, it’s all worth it.