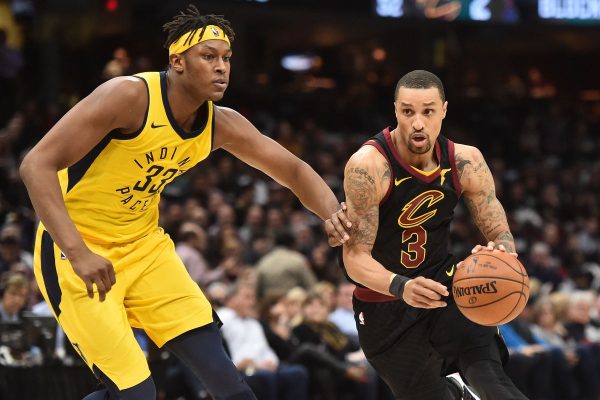 Cleveland Cavaliers point guard George Hill has been dealing with back spasms for much of the playoff series with the Indiana Pacers. Hill sat out Game 4 with the injury, but it is unclear how much his time off the court has helped his recovery.

Tyronn Lue says that George Hill (back) remains questionable for Game 5. Hill was able to go through some shooting drills at Tuesday's practice. If Hill plays at all, he will start rather than come off the bench, according to Lue. https://t.co/sdnISlBV6D

Hill had his best game of the series in last Friday’s loss to the Pacers, finishing the night with 13 points in 23 minutes. He played strongly in the first half of that game, but was less effective in the second half and barely saw the court in the fourth quarter. It was later revealed that his back injury was the reason behind that dropoff, and it is clear that he has not yet fully recovered.

Thanks to a huge win in Game 4, the Cavs have evened the series at 2-2. With the series headed back to Cleveland for Game 5, the Cavs will look to take a commanding 3-2 lead. To do that, they’re going to need all the help they can get, and Hill could certainly provide some secondary scoring if he proves healthy enough to play.

With one more day before tipoff, Hill will look surely to get the rest he needs to suit up for Game 5. Until then, fans will just have to hope for the best.