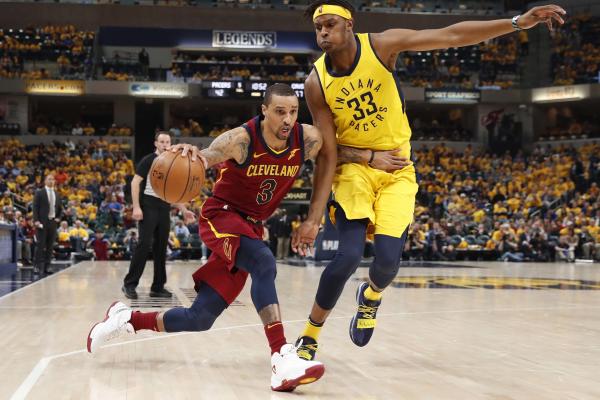 When Cleveland Cavaliers point guard George Hill was taken out of Friday night’s game because of a recurrence of back trouble, his status for Sunday night’s vital Game 4 against the Indiana Pacers was put into question. On Saturday, Hill underwent an MRI exam, with the results offering the Cavaliers some slight reassurance about the possibility of Hill playing in that game.

Sources: MRI on Cavaliers guard George Hill's back revealed nothing major. Hill is expected to receive treatment for back spasms and listed as questionable for Game 4 on Sunday.

Hill first suffered the injury in Game 1 last Sunday, when he was struck in the back as part of a pick play by the Pacers. He only played 18 minutes in that contest, but came back three nights later. In Friday night’s game, he scored 11 first-half points, but only scored two until leaving the game for good early in the fourth quarter due to the back issue.

Having Hill in the lineup would undoubtedly help the Cavs, who are currently trailing 2-1 in the series and facing the prospect of being just one game away from elimination if they lose on Sunday.