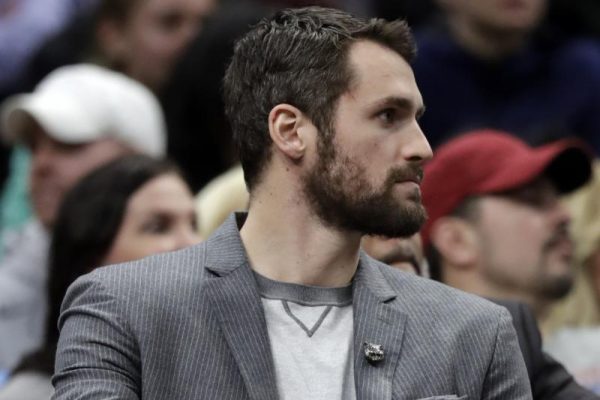 The Cleveland Cavaliers are just one day away from returning to the court, but Kevin Love will have to wait quite some time to join them. Love has been out since late January with a fractured bone in his left hand. Luckily, the All-Star big man gave fans an update on Tuesday, saying he’s about one month away from retaking the court.

Love spoke with NBCSports.com’s Kurt Helin to discuss his progress:

“I’m probably about two weeks out from getting this movable cast off for good, and then from there about a few weeks after that before I get back,” Love said of his recovery from a fractured left hand. “So I have a good amount of time, about a month.”

Love is one of the few familiar faces that remained in Cleveland after the organization cleaned house with multiple trades just before the trade deadline. While he has yet to play with his new teammates, he hasn’t failed to recognize the positive impact they have already had.

“Just clearing out…I shouldn’t say that; just getting new faces and getting new energy in the locker room has been big for us,” Love noted. “Even in the last two games, you can just see the energy is different, you can see guys are really competing on both ends of the floor, and that bodes well for us the second half of the season.”

He added that the Cavs’ newest additions in Jordan Clarkson, Larry Nance Jr., Rodney Hood, and George Hill have already helped change the culture in Cleveland:

“It might not have been a bad thing to get some fresh faces in there and guys from situations where they really wanted to win,” Love said. “I think first and foremost, seeing those (new) guys in Atlanta, they didn’t play, but they got there right after the trade and they just said they want to win.

Before his injury, Love was having another productive year despite the drama that had surrounded the Cavs for much of the 2017-18 campaign. So far this season, Love is averaging 17.9 points and 9.4 rebounds per game. With the Cavs’ new additions, it’s quite possible that Love could enjoy even more productivity thanks to their improved team defense and increased ability to stretch the floor. While he’s still a month away, Love is already looking forward to his return:

“I know we will supplement different guys in the lineup,” Love said. “I’ll hopefully be able to come back quite easily, I’ll have my legs under me — like I said, just because it’s my left hand — and I’ll be able to get back into rhythm here really fast.”

The faster Love gets back into rhythm the better. If he does end up coming back in a month, that will leave just 10 regular season games for him to get up to speed with his new teammates before the Eastern Conference playoffs begin. Only time will tell whether or not that’s enough time.