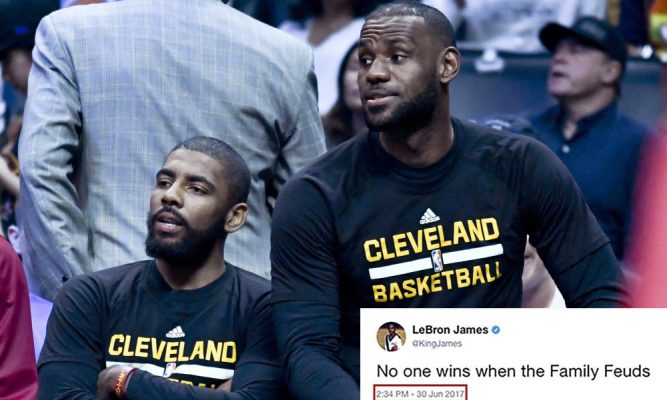 The entire Cleveland Cavaliers organization is currently in a frenzy after it was recently revealed that their superstar point guard, Kyrie Irving, wants to be traded from the team. Since the news broke, many have been searching for a concrete timeline as to when the Cavs knew about Irving’s desire to play elsewhere, and it’s possible that a month-old tweet from LeBron James may hold the truth.

According to CBS Sports, a tweet back on June 30 could be a clue as to when James, and the the Cavs’ front office, was made aware of the trade request that has sent shock waves throughout the NBA.

While James was reportedly blindsided by the revelation on Friday morning, the three-time NBA champion took to Instagram nearly a month ago to post a Jay-Z lyric that could have been aimed at Irving. If it was, it’s reasonable to assume that James was aware of the trouble brewing behind the scenes.

We may never known if James was simply showing support for his friend’s album release, or if he was subtweeting his teammate for all the world to see, but it is an undeniably interesting coincidence.

James has reportedly decided not to intervene in Irving’s trade request, but it’s possible that he was attempting to do just that via social media back in June.