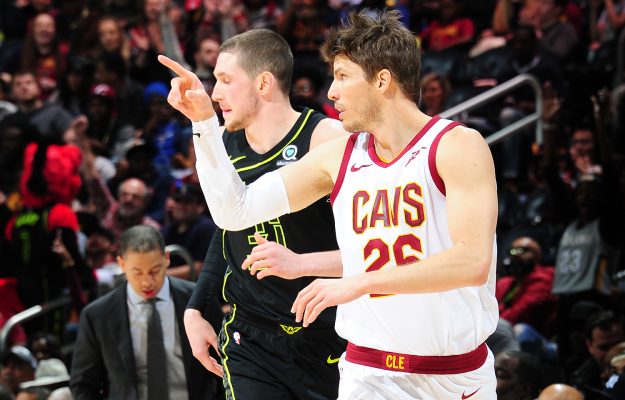 (Atlanta, GA) — Powered by the 30 points of Kyle Korver and another triple-double from LeBron James, the undermanned Cleveland Cavaliers managed to halt their frustrating six-game road losing streak with a 123-107 victory over the Atlanta Hawks at Philips Arena on Friday night.

The Cavaliers essentially used an eight-man lineup as a result of the four traded players they acquired sitting out the game. The two main bench players, Korver and Jeff Green, provided strong offense throughout the night and finished the night as the team’s highest scorers, combining for 54 points.

“I had some really fun years here,” Korver said immediately after the game. “We had some fun tonight because we knew we were going to get a lot of minutes.”

Korver was most lethal during the third quarter, connecting on four of his seven 3-pointers in the final 2:21 of the period. That was part of a 14-2 run to close the quarter, which gave the Cavaliers a 97-82 advantage.

“That’s something we want to keep getting better at,” James said. “We’ve had games where we’ve led in the first half. We want to build those habits all the way to the postseason.”

The last of Korver’s daggers in that stretch came on a buzzer-beater and fueled the momentum for a fourth quarter that pushed the lead above 20 points. One of the keys to pushing the lead even higher was the Hawks committing seven turnovers during the period.

The Cavaliers as a whole shot 54 percent from the field for the game and used 31 assists to aid in that cause.

“Everyone played together and I thought the ball was moving,” Korver said.

James ended his night with 22 points, a whopping 17 assists and 12 rebounds. The assist total tied his career-high and his second straight triple-double marked the eighth time in his legendary career that he’s accomplished that feat.

Tristan Thompson contributed a double-double with 10 points and 11 boards, while Cedi Osman had a solid all-around game with 16 points, six rebounds and five assists.

James also spoke about Osman’s performance, indicating that the effort wasn’t a surprise to him:

“He didn’t show me anything I haven’t already seen before from him,” James said.

Osman himself was enthusiastic, but humble about his game:

“I was honored that it was my first start,” Osman said. “We played at a great pace tonight and played good defense.”

The Cavaliers now travel to face the Boston Celtics in a nationally televised contest that will tip off shortly after 3:30 p.m. The game will presumably mark the debuts for the four newest members of the team, all of whom were acquired in Thursday’s deals.