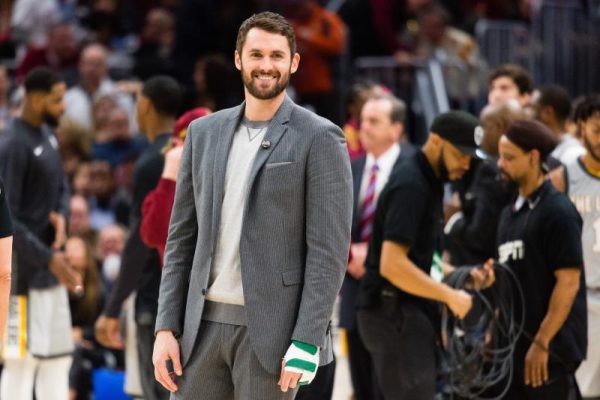 One day after the four newest additions to their team got off to a rousing start, the Cleveland Cavaliers got some good news about one of their current players who’s currently sidelined. Forward Kevin Love is progressing as expected in his rehabilitation from a non-displaced fracture in his left hand and will begin the process of getting back into shape on Tuesday.

Kevin Love told me that being sidelined yesterday for the Celtics game felt like having to stay at home sick on the first day of school. He will start running again tomorrow. Cast is scheduled to come off in two weeks. He's excited to join the new group.

The 29-year-old Love suffered his injury in the first quarter of the Cavaliers’ Jan. 30 loss at Detroit. The original diagnosis pinpointed his return to play to be anywhere from six to eight weeks, though the combination of no setbacks and his obvious motivation to return to the court could potentially speed up that time frame.

Prior to his injury, Love’s performance on the court was good enough to warrant his second consecutive All-Star selection. However, like this year, he was unable to play in that 2017 contest due to injury.

This season, he’s started all 48 of the games that he’s played in, averaging 17.9 points and 9.4 rebounds per game. In addition, his 40.4 percent shooting on 3-pointers is the second-best season percentage of his career, with only the 41.7 percent effort in the 2010-11 season topping it.