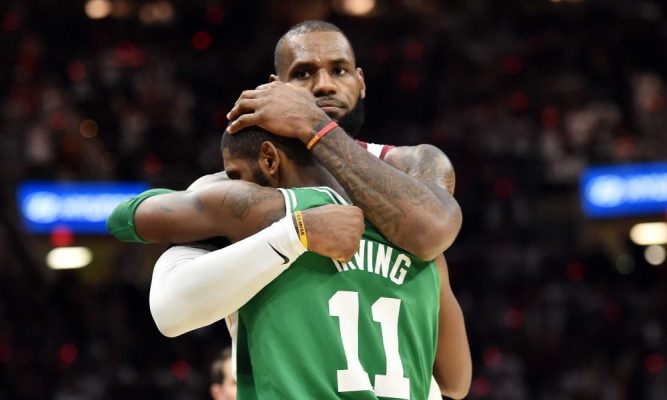 Former teammates Kyrie Irving and LeBron James have had a complicated relationship. They played together on the Cleveland Cavaliers for three years before Irving demanded a trade, in part to escape James’ immense shadow.

Yet ahead of Saturday’s game between Irving’s Boston Celtics and James’ Los Angeles Lakers, Irving feels only empathy for James’ difficult season.

“I feel for him,” Irving told The Athletic. “I really do. I feel for him. I’m very empathetic towards it because how much he wanted to play during that time when he messed up his groin. … [The criticisms are] a little unfair because of how much time he missed.”

The Lakers got off to a decent start this season, and a win over the Golden State Warriors on Dec. 25 put their record at 20-14.

James, however, injured his groin during that contest and would go on to miss 17 consecutive games. Los Angeles went 6-11 during that time.

The Lakers were fighting to stay in the playoff picture when James returned, but the team couldn’t click. According to Irving, getting a team going at that point in the season is no easy task.

“You’re coming to a team like that and you have a lot of the responsibility, and you come back in the middle of the regular season, it’s hard because now other teams are gearing up for the playoffs, that next level of play,” Irving said. “Bron knows about it, [Rajon] Rondo knows about it, but Kuz (Kyle Kuzma) and Brandon Ingram, he’s trying to teach these guys well about what it takes to win consistently in this league.

Los Angeles is now 30-35, and 6.5 games out of the playoffs. Barring something miraculous, James will miss the playoffs for the first time since his second NBA season.

Irving’s Celtics have had their own share of struggles this year, even though they’re in a much better place than the Lakers.

Boston is fifth in the Eastern Conference, which is well below preseason expectations. However, it’s 40-26, with the third-best net rating in the NBA.

The six-time All-Star thinks Boston will do big things in the playoffs, in large part because of the lessons he learned with the Cavs. Like James this year, Irving was dealing with an injury during Cleveland’s run to the title in 2015-16.

“I was met with a lot of negativity towards my game,” Irving said of that season. “Like, ‘Well, well, he shouldn’t be shooting as much.’ And when I first came back, like ‘Oh, he’s messing up the chemistry.’ I had a lot to prove. And I finally hit my stride heading into the playoffs. And when I finally did that, I had an unbelievable playoff run, which was guided by incredible teammates. They all were supportive of what I was doing and T. Lue (coach Tyronn Lue) gave me the green light, Bron gave me the green light.”

Any awkwardness between the two superstars appears to be cleared up. Irving, now a respected leader, called James earlier in the season to apologize for his behavior while with the Cavs.

James has constantly praised Irving on social media and selected him early on in the 2019 All-Star Game draft.

A 15-time All-Star, James recently made history by passing Michael Jordan on the NBA’s all-time scoring list, and his former teammate had nothing but kind words about that accomplishment.

“We all knew that (James) was going to pass a bunch of records,” Irving said. “I think the way he’s doing it has been nothing short of extraordinary. … I mean, records were meant to be broken, and I think him passing another 23 (Jordan) meant a lot in his legacy, in his eyes. I’m nothing but happy for him.”