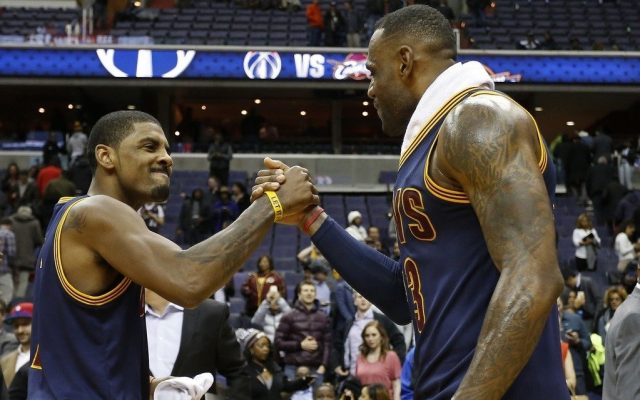 Performing in the clutch is a rare talent that few NBA players possess, but for the Cleveland Cavaliers, the duo of Kyrie Irving and LeBron James rank among the league’s best when it comes to closing out a game.

That’s reiterated in the opinion of Irving, who has indicated that head coach Tyronn Lue prefers the ball in either Irving or James’ hands when a game is in the balance. Irving effectively closed out both Games 3 and 4 of the first round series to sweep the Detroit Pistons.

“He wants the ball in me and Bron’s hands at the end of the game and I think that’s where it should be,” Irving said.

That hero ball/isolation strategy has been criticized during the course of the season and critics seemed to be correct in Game 4 after Lue had both Irving and James hold the ball for long stretches during the final six minutes of the game. During this stretch, the Pistons sliced a nine-point deficit to a single point.

Still, Irving connected when it counted most and Lue had indicated that the specific circumstances had dictated the call. Lue also noted that there’s no chance that isolation ball will again become the norm.

“In the playoffs, we’ve been in tough positions and continued to share the basketball, continue to make the right play, the extra pass, and I think the team sees that it’s a lot more fun playing that way, ” Lue commented. “It becomes contagious.”

A quick look at the statistics confirms the value of depending on Irving and James down the stretch. Comparing points scored in games when the margin is five points or less in the final five minutes of the game, Irving was eighth-best during the NBA regular season, averaging 3.6 points per game. James was even better, scoring 4.0 points per contest, good for fourth-best in the league.

When it comes to the playoffs thus far, Irving’s third-best in the NBA with 10 total points (2.5 per game) in that same category so far, while James is two spots behind him with six total points or 1.5 per contest.

“At the end of the day we have two of the best closers in the game playing on one team,” Irving said. “You have a 6-8 monster (James) who can penetrate and get anywhere he wants on the floor, and then myself having that confidence in those situations. Regardless of who the play is drawn up for, that’s up to T-Lue.”

The Cavaliers will return to testing this theory on Monday night, when they open up the Eastern Conference semifinal series against either the Atlanta Hawks or Boston Celtics.