Don't Miss
Home / Videos / Video: LeBron James Explains Why He Went Off on Cavs in Toronto

Video: LeBron James Explains Why He Went Off on Cavs in Toronto 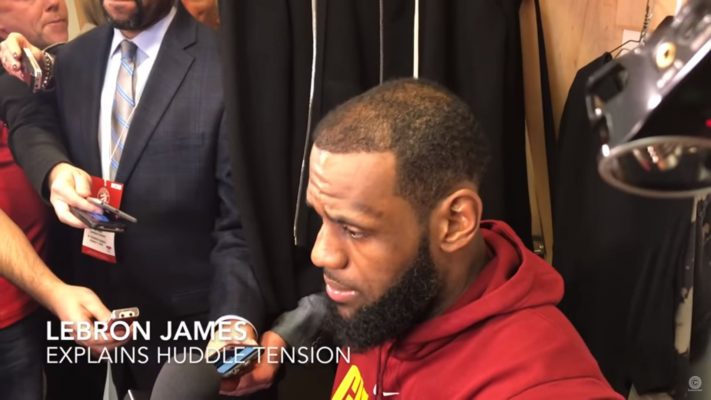 The frustration felt by the Cleveland Cavaliers that stemmed from being routed in consecutive games was most notably captured during the second quarter of Thursday night’s 133-99 loss to the Toronto Raptors. That’s when TNT cameras captured a visibly angry LeBron James yelling at assistant coach Phil Handy on the team’s bench after having previously yelled at teammate Kevin Love.

Some controversy was sparked by James and Love’s interaction that took place toward the end of the first half. That came just after Toronto scored on a dunk with virtually no defense offered by Love or any other Cavaliers player. However, Joe Vardon of Cleveland.com clarified the situation:

“Coach Tyronn Lue took a timeout, and on the way to the bench, according to sources, James was ripping into Love for the play,” Vardon wrote. “Love agreed with James, but by the time they got to the bench, Handy started into the players.”

At that point, James and Handy exchanged words, though the dispute was resolved between the two during the halftime break. After the game, James didn’t offer any hint as to what was said, but discussed the reason for his outburst:

“We’ve all got to be accountable for actions, accountable for how we play, how hard we play, what we’re doing for one another,” James said. “Just plays that you should come up with, you should make, and when you’re losing, you tend to not want to make those plays or tend to let some plays get away from you. And we can’t afford that right now, the way we’re playing ball. So, just trying to hold everybody accountable and move on, which we did.”

Such arguments aren’t uncommon during the course of a long season and tend to crop up during the type of circumstances the Cavaliers are currently experiencing. James acknowledged that such events will inevitably take place in team-oriented sports:

“Family’s not always about a bed of roses,” James said.

The Cavaliers have the opportunity to erase such bad memories by closing out their lengthy road trip with a win on Friday night. That’s when they travel to face the Indiana Pacers in a game that will tip off just after 7 p.m.