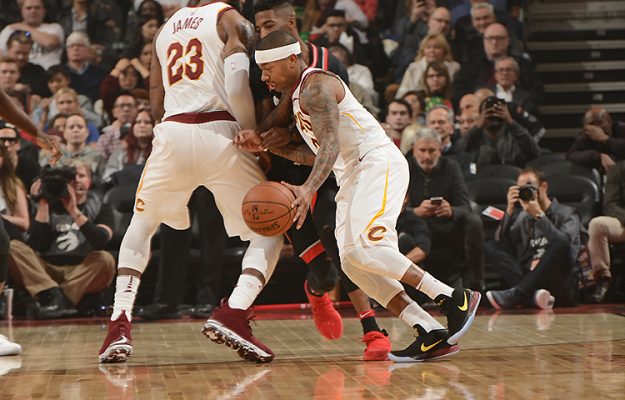 (Toronto, ON) — Another disastrous first half was fatal to the Cleveland Cavaliers‘ effort to get back in the win column as they were pounded by the Toronto Raptors by a score of 133-99 at Air Canada Centre on Thursday night. The loss was the Cavaliers’ seventh in their last 10 contests.

LeBron James led the Cavaliers with a game-high 26 points, but only managed three rebounds and a single assist. The only other Cavs to score in double figures were Jeff Green with 13, Jae Crowder with 11, and Kevin Love with 10 and nine rebounds.

The Raptors were missing an injured Kyle Lowry and suspended Serge Ibaka, yet still had little trouble with the Cavaliers. Prior to the game, Cavs head coach Tyronn Lue spoke about how dangerous the Raptors were despite those absences, a message that went unheard.

“They’re still a good team, they still play hard, the young guys play hard,” Lue said. “They’ve still got (DeMar) DeRozan, who’s averaging [32] points a game over his last [six]. We’ve got to be locked in to what we’re doing and be professional.”

As in Cleveland’s Monday night loss at Minnesota, the second quarter served as ground zero for the meltdown. Trailing 30-24 at the start of that period, the Cavaliers were outscored 35-16, which included a 19-4 run by the Raptors that effectively put the game away and allowed them to take a 65-40 lead into halftime.

The main reasons for the Raptors’ domination stemmed from a number of factors, including a 37-20 advantage on the glass during that opening half and 63-35 for the game. Toronto got countless second-chance opportunities by grabbing 12 offensive boards during the first half, while also seemingly driving into the paint with ease, scoring 42 of their 65 first-half points in the paint.

The Raptors also connected seven times on 3-pointers, while the Cavs missed all seven of their long-range attempts in the first quarter. Shooting in general was terrible for the Cavaliers, who shot 33 percent from the field in the first two quarters. That included a 5-of-20 (25 percent) effort in the fatal second period, which was when they also committed five turnovers.

Also mirroring Monday night’s debacle, the Cavaliers emerged for the second half and then allowed the Raptors to score 10 of the first 12 points, giving the hosts a commanding 75-42 lead. The Cavs slightly chipped away at that massive deficit by putting together a 15-5 surge, but the Raptors boosted the margin back above 30 and eventually took a 100-72 lead into the final quarter of garbage time. They were even deadlier with 3-pointers in this quarter, hitting for eight more before finishing with 18 on the night.

After the team’s shootaround earlier in the day, James had spoken about the inconsistency the team has shown during the course of the regular season. Thursday night’s result focused on the bad side for the second consecutive game.

The Cavaliers don’t have much time to try and revert to their good side with another road game against the Indiana Pacers set for Friday night. Tipoff for that game will be just after 7 p.m. ET.