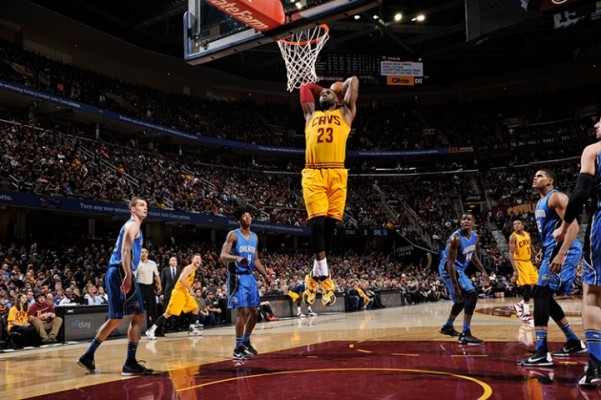 (Cleveland, OH) — For the second time in a little more than three weeks, the Cleveland Cavaliers were too well-rested and just too much for the Orlando Magic to handle as they cruised to a 104-79 victory at Quicken Loans Arena.

LeBron James scored 20 of his 29 points in a first half where the Cavs held the Magic to a season-low 32 points. As was the case in a 111-76 rout of the Magic on Dec. 11 in Orlando, the Cavs displayed much fresher legs. This was their first game since winning Tuesday night at Denver behind 34 points from James, while the Magic were playing away from home for the second time in as many nights.

After failing to crack the 100-point mark in any of their games during a road trip where they went 2-2, the Cavs raised their record to 15-2 when they score at least 100 points and 22-9 overall. The win was their 13th in a row over the Magic, with the average margin of victory in that streak being more than 16 points.

Playing in his first game since turning 31 on Wednesday, James got plenty of help in staking the Cavs to a 20-point lead before the end of the first quarter. Kyrie Irving, who sat out the win over the Nuggets as a precautionary measure, had a three-point play off one of the Magic’s four turnovers in the quarter. Kevin Love, Richard Jefferson and Iman Shumpert all knocked down three-pointers as the Cavs got back to consistent crisp ball movement.

When James connected from three-point range halfway through the second quarter, the lead had grown to 44-17. Their largest advantage came when a 12-0 run late in the third quarter put the Cavs up 80-49.

Coach David Blatt was able to rest James, Irving, Love, Tristan Thompson and J.R. Smith for the final 12 minutes. Through three quarters, the Cavs recorded 19 assists on 27 field goals made with only four turnovers.

“You can always find things you can do better, but pretty positive and pretty good effort,” Blatt said.

Instead of being a facilitator in the early going, James wasted no time establishing himself as the main scoring threat against the Magic, who got a total of only seven points from their starters in the first half. Late in the second quarter, he posted up Evan Fournier before spinning to his right for an easy dunk.

“It makes things easier for us,” Thompson said of James’ assertive play. “It opens everything up. Even if he’s not shooting the ball well, he’s still going to make big plays and attack the rim.”

Irving handed out four of his five assists by halftime, although his 4-of-12 shooting performance showed he still isn’t fully back to his All-Star form. Thompson, making his third consecutive start at center, grabbed 12 rebounds in 29 minutes. Six of those came on the offensive end, which was one more than the entire Magic team finished with.

Love finished with a game-high 13 rebounds, the fourth time in the last six games where he ended up in double figures in that category.

“Tonight was just a lot freer, in terms of us getting back to playing the game with a lot better pace,” Irving said. “There weren’t too many play calls, but when we did, we executed the best we could.

“Mainly it was me and Bron keeping the pace and everybody filling the lane.”

While the fourth quarter didn’t turn into the three-point shooting bonanza that James Jones enjoyed in Orlando, the well-liked veteran scored all 10 of his points after the outcome was no longer in doubt.

With three assists in 29 minutes, James moved past Nate Archibald into 21st place on the NBA’s all-time list in that category with 6,478.

The Cavs are home Monday night to the Toronto Raptors before embarking on a six-game road trip.