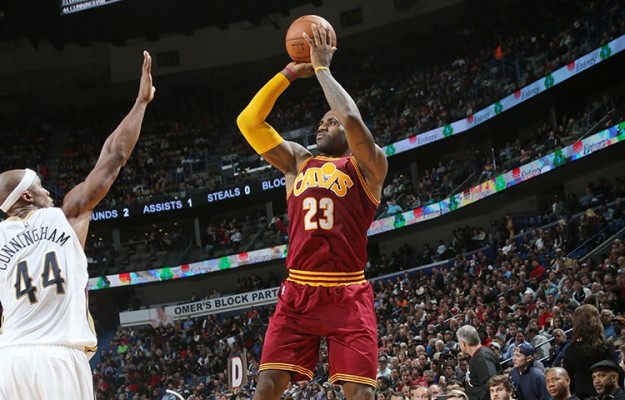 LeBron James finished with 37 points, including 23 in the fourth quarter alone to give the Cavs the lead late in the period. Midway through the fourth, Cleveland trailed 94-81, but the four-time MVP took over late to give the Cavaliers a 101-98 lead with 1:15 left in regulation.

Though James outscored the entire Pelicans squad in the fourth—23 points to 21—it just wasn’t enough.

After the Pelicans’ Ryan Anderson tipped in a missed shot to cut New Orleans’ deficit to one point, James turned the ball over on the following possession. Pelicans center Anthony Davis then stole the ball for a dunk to put New Orleans back up 102-101 with 45 seconds left.

Just a few seconds later on the ensuing possession, James’ layup past Davis gave Cleveland a one-point lead yet again. The Pelicans would miss a layup on the next possession, before James converted on two free throws to give the Cavaliers a 105-102 lead.

On the very next play, the Pelicans’ Jrue Holiday would knock down a trey to tie the game at 105 with eight seconds remaining with James failing to win the game on a shot attempt as time expired in the fourth.

The Cavaliers ended up coming out flat in overtime as New Orleans outscored Cleveland, 9-3. Despite his heroic performance in the fourth quarter, James failed to score in the extra period. When James was asked after the game about taking over in the fourth, he responded with the following:

“Who else was going to do it?”

Davis spoke of the hard-fought victory after the win:

“It was tough. LeBron got it going in the fourth and we just kept staying together, getting second chance points and then Jrue hit the big three.”

J.R. Smith began the game with an excellent start, scoring 15 points on 5-of-7 from beyond the arc in the first quarter alone. However, he quickly fizzled, closing out the rest of the game on 1-of-7 shooting. Kevin Love was the only Cavalier outside of James and Smith to score in double figures, posting 15 points and 10 boards on just 6-of-17 from the field.

The 22-year-old Davis paced the Pelicans as he finished with 31 points and 12 rebounds despite exiting the game temporarily in the second quarter with an ankle injury. He scored six of New Orleans’ nine points in the overtime period.

Anderson had 18 points off the bench, as he continued to be a thorn in the Cavaliers’ side. In two meetings versus Cleveland last season, Anderson had 16 total treys. Tyreke Evans notched a double-double in the win with 14 points and 10 assists, while Eric Gordon posted 19 points.

The Pelicans’ victory ended a four-game losing streak, while the Cavs’ loss marked their second straight since losing to the Washington Wizards on Tuesday night.

Cleveland has struggled with consistency issues early on in the season, as James has constantly voiced his displeasure over the team’s effort and execution in certain games this year. Following the loss, the small forward was asked if Cleveland was simply waiting for Kyrie Irving and Iman Shumpert to return before the team looks right:

“There’s only one guy ever in the world that everything will be all right when he comes back and that’s Jesus Christ. Other than that you can’t bank on nobody…”

The Cavaliers will continue their road trip when they travel south to Miami to play the Heat at American Airlines Arena on Saturday night. The game will take place at 7:00 Central Time and the game will be broadcast nationally on NBA TV.