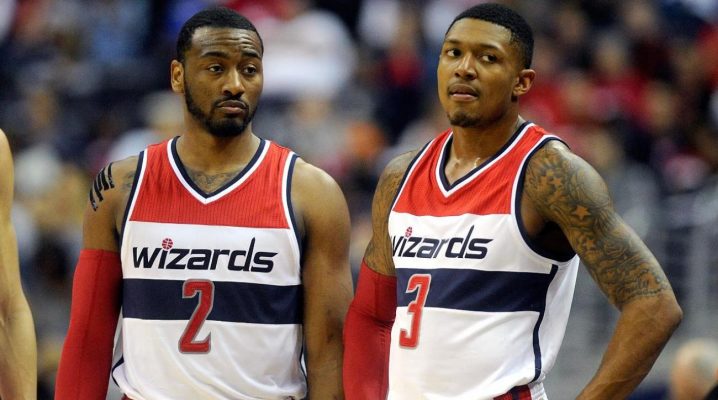 As the Cleveland Cavaliers prepare for their Friday night matchup against the Washington Wizards, both point guard John Wall and shooting guard Bradley Beal are taking shots at the defending Eastern Conference champions.

Beal and Wall spoke with ESPN’s “The Jump” to state that they believe the Wizards are the new class of the East.

“It’s playoff style,” Beal said of Friday night’s game. “That’s one of the best teams to be assembled. You’ve got LeBron [James] who’s been in the Finals the last seven times. So there’s always hype behind it. And you always bring your A game when you’re playing against the best. So that’s kind of how we go back and forth. We know we can challenge them, and they know they challenge us. It’s always a good matchup. We love it. We embrace it.”

Wall chimed in, adding to his teammate’s sentiment.

“We feel like we’re their biggest threat,” Wall said. “We just got to find a way to get over that hump and meet them in the Eastern Conference Finals.”

ESPN’s Paul Pierce then asked the two where they think their team sits in the Eastern Conference.

“I feel like we’re the best team. That’s just the way I feel,” Beal said. “I always stand by it because I mean, why would I sit here and say another team’s better than my team? I’m not going to sit here and do that. I’ve got confidence in myself and my teammates and what we can bring to our team and what we can accomplish.”

Wall followed up by asserting his belief that the Cavs purposefully missed out on last season’s No. 1 seed because they didn’t want to match up against the Wizards in the second round of the 2017 playoffs.

“I think if you look at last year, people might say they did or didn’t, but I think they didn’t want the No. 1 seed for a reason because we would have played them in the second round,” he said. “I think they wanted to see us in the Eastern Conference Finals and we fell one game short of that.”

The Wizards are an undeniably talented team. With the Cavs struggling early in the 2017-18 season, it’s no surprise that they are confident in what they can achieve this season. James and the Cavs will look to dash the Wizard’s early-season confidence on Friday night as they take on the Wizards in the nation’s capital.