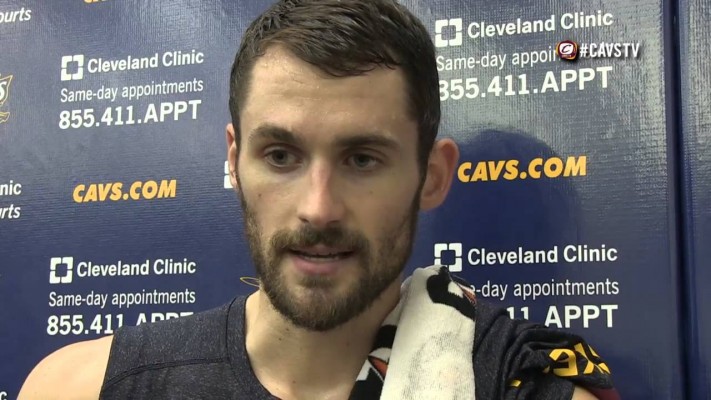 Kevin Love had his first real practice of training camp on Saturday and it was a productive one.

Love has spent the past several months rehabbing from shoulder surgery and had his first 5-on-5 full-court, full-contact practice of camp. The Cleveland Cavaliers forward said he felt “really good” following the scrimmage:

“I felt good. Just getting into the rhythm of the plays more than anything, just getting my legs under me and contact — 5-on-5 felt really good.”

The last time Love saw full-contact action on a court in a real game setting was in April when he dislocated his shoulder in a first-round playoff series versus the Boston Celtics.

“[I felt] pretty anxious. It had been six months now. As far as progressing from the pad into 1-on-1, to 3-on-3, I was ready to get back out there in 5-on-5. As time goes [on], I’ll get more and more accustomed to being out there playing, but today was the first step.”

Though head coach David Blatt did state earlier in the week that the 6’10” big would be ready for the season opener on October 27th, Love warned that it is not set in stone:

“As far as the opener goes, I am not completely sure. I’ll probably get with the doctors and see what they have to say. I like to think that I am ahead of the game, but there’s different tests and the due diligence that the doctor will go through and the training staff will go through.”

The Cavaliers have not gotten off to a great start since training camp began. Tristan Thompson continues to remain unsigned, while Iman Shumpert has been ruled out for the next several months due to wrist surgery. Kyrie Irving also remains extremely limited as he recovers from knee surgery.

Blatt has already stated that Love won’t play in the team’s back-to-back preseason games versus the Memphis Grizzlies on Monday and the Milwaukee Bucks on Tuesday:

“At this point, we’re kind of trying to stay true to our plan here. And we could throw him out there, but I don’t think it’s necessary at this point. We’re just going to keep working and keep progressing consistently and steadily with him.”

While we may not see Love in an actual game over the next week, Saturday represented a sign of progress as he continues to recover from his shoulder injury.