Don't Miss
Home / Videos / Video: Stephen A. Smith Fires Back at J.R. Smith and Rips Him for Recent Poor Play

Video: Stephen A. Smith Fires Back at J.R. Smith and Rips Him for Recent Poor Play 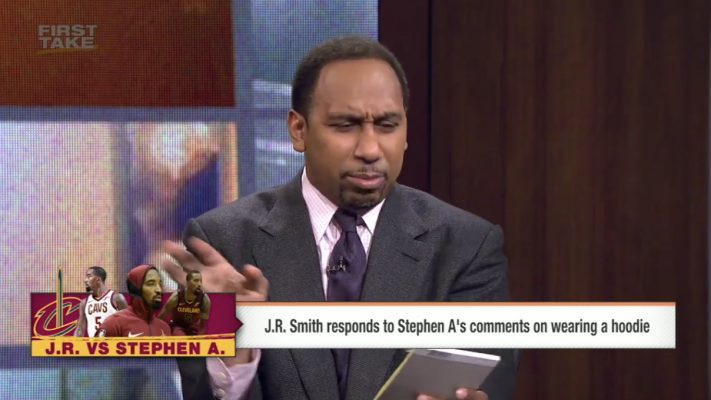 The war of words between Cleveland Cavaliers shooting guard J.R. Smith and ESPN analyst Stephen A. Smith continued on Monday when the show host took to “First Take” to discuss the growing feud.

The clash between the two began last week when Stephen A. Smith criticized the 14-year veteran for wearing a hoodie while sitting on the bench.

“In Game 1, when they played against Boston, J.R. Smith was sitting on that bench with a hoodie on,” Stephen A. Smith said. “I don’t know why the hell Nike made these damn uniforms that had hoods attached to it, by the way. You got a lot of white folks in the audience that are gonna think this is Trayvon Martin being revisited, and I’m not joking about it. The bench is no place for someone to be wearing hoodies.”

J.R. Smith responded to the criticism by wearing his hooded sweatshirt pulled up tightly over his head during the entirety of the pregame warmup prior to the Cavs’ Saturday matchup against the New Orleans Pelicans.

This man is always reaching. What does me wearing my Hoodie on the bench have anything todo with reminding “white people” of #trayvon

One they shouldn’t forget about him! An 2 how does me out of all 450+ Nba players. Like seriously keep my name out ya mouth. @stephenasmith

You want to talk about me not playing that’s fine but don’t try an put me in something I have nothing todo with. An I’m not the only one!

Stephen A. Smith responded to the former Sixth Man of the Year on Twitter as well.

Saw what ya said @TheRealJRSmith. Wasn’t talking about YOU went I went at the hoodie. Was talking of NIKE & how I don’t believe hoodies…..

Is what matters. You ain’t playing in a garage by yourself. YOU could be the difference @TheRealJRSmith. We’ll see what you do. PERIOD!

On Monday the show host further clarified his position, saying that it’s not the hoodie that matters, but J.R. Smith’s performance on the court.

He continued by breaking down J.R. Smith’s several subpar performance so far this season.

“Since I said that commentary that we played, J.R Smith had three games against Chicago, Brooklyn, the New Orleans Pelicans,” he said. “In those three games, he combined to shoot 3-of-20 from the field, 2-of-15 from three-point range. It’s been so bad for J.R. Smith that the damn dude scored 11 points on 3-for-9 shooting last night in a loss to the New York Knicks, and they were ready to give him a standing ovation. That’s how bad it is.”

Later in the segment, the show host addressed J.R. Smith directly, saying that he should not be focused on the criticism he is receiving, but rather on improving his game.

“The fact of the matter is you didn’t learn how to handle the damn basketball until last year,” he said. “If you start playing the the way you’re supposed to be playing, you won’t need be concerned about any damn comments from me because I’ll have nothing to say, because you will have handled your business and you will have balled, which you are not doing.”

J.R. Smith is clearly not the only member of the Cavaliers that is currently struggling. Following their Sunday loss to the Knicks, the Cavs have fallen to 3-4 on the season after losing three straight games. He and the rest of his teammates will have an opportunity to right the ship and the silence the critics when they face off against the Indiana Pacers on Wednesday night.