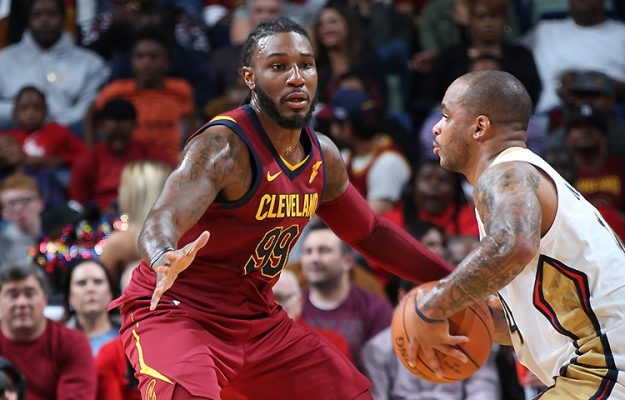 (New Orleans, LA) — Defensive woes once again hit the Cleveland Cavaliers as they were on the short end of a 123-101 decision to the New Orleans Pelicans at Smoothie King Center on Saturday night. The defeat now drops the Cavaliers to 3-3 on the season and sends them to their third loss in the last four games, with four members of the Pelicans’ starting lineup accounting for all but 11 of their team’s points.

Over the course of the contest, the Pelicans managed to pick up a total of 33 assists, with the duo of Anthony Davis and DeMarcus Cousins combining for 59 points and 26 rebounds. Cousins notched a triple-double with 29 points, 12 rebounds and 10 assists, while Davis managed a double-double with a game-high 30 points and 14 rebounds on the night. For good measure, Jrue Holiday chipped with 29 points and E’Twaun Moore added 24.

“We have to do a better job of taking on the one-on-one challenge,” Cavs head coach Tyronn Lue said after the game. “We’re also missing 3-pointers and jump shots and not getting back in transition.”

For the Cavaliers, Kevin Love had a double-double with 26 points and 11 boards, while LeBron James finished with 18 points, eight assists and five rebounds. The only other member of the Cavs to reach double figures in points was Dwyane Wade, who contributed 15.

“It’s a long season, I’m not getting too high when we win and too low when we lose. I’m an even-keel person,” James said. “It’s all part of the process.”

One of the chief problems for the Cavaliers during the first quarter was their chilly shooting touch that saw them shoot just 35 percent. Contrasting that was the 61 percent shooting by the Pelicans, which helped them to a 35-22 lead by the time the horn had sounded to end the period.

“It’s early in the season, so you want to make your mistakes early and learn from them,” Wade said. “At some point, you get tired of being down early.”

Cleveland wasn’t able to make much of a dent in that deficit, managing to get it down to five points on a Wade dunk with 7:36 left in the second. For the remainder of the quarter, New Orleans methodically built that lead back up, taking as much as a 15-point lead before heading to halftime sporting a 65-52 advantage. Smooth ball movement by the Pelicans allowed them to rack up 21 assists during the opening two quarters.

“They get the ball and they push it,” Love said. “They’re a tough team to defend.”

Trailing by 13 at the break, the Cavs briefly took the lead in the third quarter, going on a 21-7 surge to go up 73-72. The last three minutes of that stretch was when they did the bulk of their damage, using the 3-pointer as their main weapon. Love nailed three of those long-range bombs, with J.R. Smith adding another.

Love was asked about what change took place for the fast third-quarter start.

“I think it was pace, we were playing with confidence,” Love said.

However, that run was short-lived, with the Pelicans putting together their own 13-2 run and eventually taking an 89-83 lead into the final quarter.

“It was a game of runs and they made the final one,” James said. “We have spurts and we know that we need to sustain them longer.”

That would be as close as Cleveland got the rest of the contest, with New Orleans using the first six minutes of the final stanza to go on a game-clinching 21-8 run. Soon after, Lue emptied the bench to finish up the game and rest his starters for their game on Sunday night.

“I thought we had a lot of great shots tonight, but they just didn’t go in,” Lue said.

In that Sunday contest, the Cavaliers will return home to face the New York Knicks, with tipoff at Quicken Loans Arena set for just after 7 p.m.