Video: LeBron James Explains Why Cavs Are Struggling So Much to Start Season 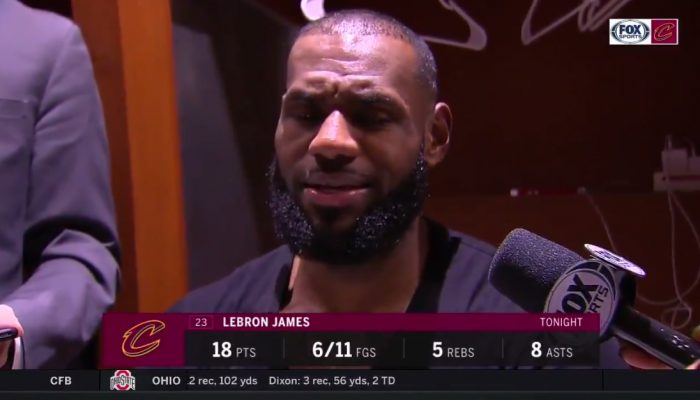 The Cleveland Cavaliers lost their third game of the season on Saturday night, bringing their record to an uninspiring 3-3 to start the 2017-18 season.

Following the loss to the New Orleans Pelicans, LeBron James spoke with members of the press to explain why the Cavs are struggling to win games so far this season.

Not an ideal start for the @Cavs, but @KingJames knows it's a long process and his team will be fine. #AllForOne pic.twitter.com/uutm3udq0R

“I’m fine and we’re fine,” said James, who had 18 points, five rebounds, and eight assists in the game. “It’s a long season, we’re out two starting point guards, alright? We’re not overlooking what’s going on, I wasn’t going to overlook if we had success, I’m not gonna overlook if we had a couple games off. I’m not getting too high, getting too low, I’m an even-keeled guy.”

James continued by explaining that the team is going through some early-season growing pains and that there is a lot of time to right the ship.

“We’ve played some crazy lineups that we haven’t even played in practice,” he said. “We’ll continue to get better. There’s going to be some games that we don’t look as good, unfortunately, but that’s all part of the process. We just have to be patient with it until we become full strength and we got lineups and things out there that we all become comfortable with.”

A 3-3 start to the season is no reason to panic, but it is a clear sign that the Cavs have room to improve if they plan on achieving their goal of bringing another NBA championship to The Land. Thankfully, the Cavs have the best player and best leader in the NBA in James. If he’s not worried about the Cavs’ slow start, there’s no reason anybody else should be.