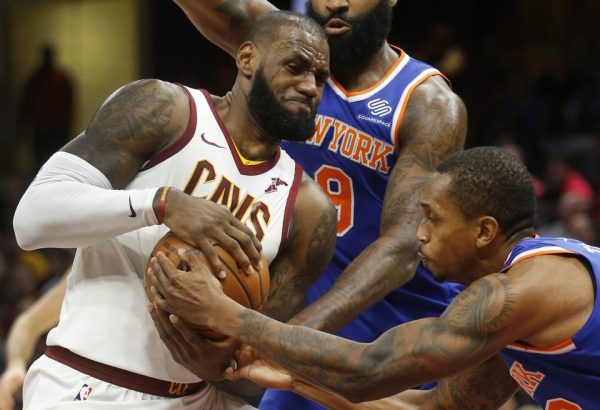 (Cleveland, OH) — Plagued by sluggish performances across the board, the Cleveland Cavaliers dropped their third consecutive game with an embarrassing 114-95 defeat at the hands of the New York Knicks at Quicken Loans Arena on Sunday night. The loss snaps a 10-game winning streak the Cavs had over the Knicks and drops their record below .500 for the first time this season at 3-4.

During the first four minutes of the final period, the Cavs put together a 13-2 run to turn a 17-point deficit into a two-possession game at 94-88. However, the Knicks managed to right themselves by running off nine unanswered points to pull the upset, taking full advantage of the Cavaliers’ continuing struggles on defense and closing the game on a 20-7 surge.

“We can’t seem to sustain our effort,” Cavs head coach Tyronn Lue said after the game. “I don’t know if it’s our shape, but others teams are beating us and we can’t keep up.”

Kevin Love and LeBron James each collected double-doubles, with Love scoring a team-high 22 and grabbing 11 rebounds, and James dropping 16 points, 10 rebounds and seven assists. Three other Cavs also reached double figures in scoring, with Derrick Rose tossing in 15 in his return to the court after a four-game absence. Meanwhile, Kyle Korver tallied 13 off the bench and J.R. Smith tossed in 11.

“We know what our end goal is, but we have to stay in the present and play 48 minutes every night,” Love said.

The key reasons for the Cavaliers’ defensive woes were fixated on the Knicks starting forwards, Tim Hardaway, Jr. (34) and Kristaps Porzingis (32), who combined for 66 of their team’s 114 points. For good measure, New York’s starting center Enes Kanter picked up a double-double with 18 points and 12 boards. All of that production was fueled by the defensive issues that have been magnified for the Cavs over the past week, which helped the Knicks thrive when it came to ball movement as they ended the night with 27 assists.

“Guys are just scoring at will against us. Our defense is pretty bad right now, including our transition,” James said. “We haven’t had much progress of late, but we could get better.”

Following an early 13-10 Cavaliers lead that came about because of consecutive 3-pointers from Love, the Knicks went on a 19-6 run over the final seven minutes of the opening quarter. The 29-19 New York lead when the horn sounded marked another instance of Cleveland falling behind by double-digits in the first period.

“We’ve got to stop putting ourselves in a hole and get our spirit back,” Korver said. “We have to figure it out.”

Frustration was constant for the Cavaliers in the second quarter, with positive steps quickly negated along the way. The Cavs chopped the margin to two at 37-35, only to see the Knicks boost their lead back up to seven points. That was followed by Cleveland then tying the game at 49, only to see New York close out the half with a 13-5 run to make it 62-54 at the break.

Veteran Dwyane Wade was asked about the strategy of teams having success running against the Cavaliers.

“Everyone’s trying to play an up-tempo game, not just against us,” Wade said. “A lot of teams we’ve played this year are younger and they’re using that.”

Things got even worse after the two teams resumed play in the second half, with the Knicks taking as large as an 18-point lead at 89-71 with 1:37 left in the third quarter. By the time the period had ended, it was 92-75, with the Cavs constantly getting out-hustled and beaten on the boards. In the latter category, New York held a 41-28 advantage after three quarters, including 10-6 on the offensive side of the glass. For the Cavaliers, the main hindrance during the period was their weak shooting, which saw them connect on just 6-of-22 from the field.

“Tonight’s loss and the last few have been unacceptable,” Lue said after the game. “The players and coaches have to put in the work and get it fixed. I’m not concerned about that.”

James was asked about the fact that it was the 14th anniversary of his first NBA game, with the future Hall of Famer comparing that contest with the loss to the Knicks.

“I played better 14 years ago than I did tonight,” James said.

Of more immediate concern, the Cavaliers will stay at home for their next game, a Wednesday night matchup against the Indiana Pacers. Tipoff is set for just after 7 p.m. ET.