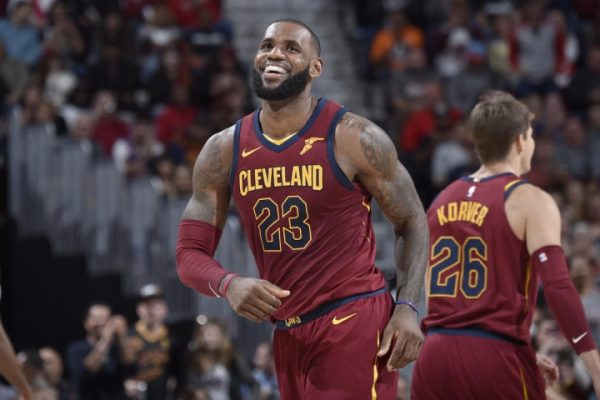 (Cleveland, OH) — Tightening their defense in the second half paid big dividends for the Cleveland Cavaliers as they got back on the winning track with a 119-112 victory over the Chicago Bulls at Quicken Loans Arena on Tuesday night. The victory boosts the Cavs’ early-season mark to 3-1, while the Bulls continue to look for their first win as they drop to 0-3 on the year.

During their second consecutive slow start, the Cavaliers managed to give up 68 first-half points before allowing just 44 after the break. Cavs head coach Tyronn Lue had made some dramatic shifts in the team’s starting lineup prior to the game, which included putting LeBron James at point guard and starting Tristan Thompson at center. James wasn’t concerned about shifting to a relatively unfamiliar position.

“I know every single play at every position,” James said. “So it makes it easier for me because I know where my teammates are supposed to be on the court.”

Having trailing from the outset, the Cavs finally knotted the score in the third quarter on a 3-pointer from the right corner by Jae Crowder, which was then followed by a layup from Thompson on a feed from J.R. Smith to make it 74-72 in favor of the Cavaliers. After seemingly taking control of the game with an 88-80 advantage, Cleveland then watched Chicago go on a 12-3 run over the last four minutes of the quarter. That push gave the Bulls a 92-91 lead with 12 minutes remaining.

“I thought we moved around better in the third,” Lue said. “We just have to have a different mindset from start to finish.”

In that final quarter, Chicago managed to chop its margin to just three points at 106-103 with just under eight minutes left. At that point, a 10-2 surge by the Cavs in less than four minutes effectively gave them the game, though the Bulls did manage to slice the deficit back down to six.

“It wasn’t pretty because we let another team get some early confidence,” Kevin Love said immediately after the game. “We just need to play our game and get our defense locked down.”

The start of the game mirrored the slow beginning that doomed the Cavaliers against the Orlando Magic on Saturday night. The Cavs gave up the first seven points of the game, fell behind by double digits and twice trailed by as many as 14. The early Chicago surge was primarily due to the 69 percent shooting (11-of-16) from the field to start the game.

“Defensively, we have to get better. Until we do, we’re going to get off to slow starts and getting into dogfights,” Lue said. “We have to make guys dribble the basketball.”

Taking a 38-28 lead into the second quarter, the Bulls continued to hit from long-range, finishing the first half with 12 3-pointers, while also dishing out 17 assists in those first two periods. However, thanks to 65 percent shooting from the field, the Cavaliers chopped their deficit down to just three at 68-65 when the halftime horn sounded.

“We have to be professionals and we have to bring it every night,” Love said. “We did that in the second half.”

James ended up with a double-double, leading all scorers with 34 points and also handing out 13 assists. Four other Cavaliers managed to also tally double figures, with Love also contributing a double-double with 20 points and 12 boards. Rounding out the group were Jeff Green with 16 points and the duo of Kyle Korver and Dwyane Wade with 11 points each. In the latter case, Wade’s 5-for-7 shooting from the field was a positive step forward for the 15-year veteran who’s gotten off to a slow start.

The 46 points from the Cleveland bench didn’t go unnoticed by James.

“The bench won us the game,” James said. “But we have to come out with a greater sense of urgency.”

One indication of how effective Cleveland’s defense was following intermission can be found in looking at the stats of Chicago forward Lauri Markkanen. In the first half, he scored 17, but was held to just two in the third and fourth quarters. Lue was asked during his postgame press conference about how the Cavaliers were able to clamp down on the Bulls big man.

“Closing out, getting to his body,” Lue said. “We know he can kick-and-pop and we did a much better job of getting to him.”

The Cavs don’t have much time to ponder this contest since they’ll be facing the Brooklyn Nets on the road Wednesday night. Tipoff for that game will be just after 7:30 p.m.