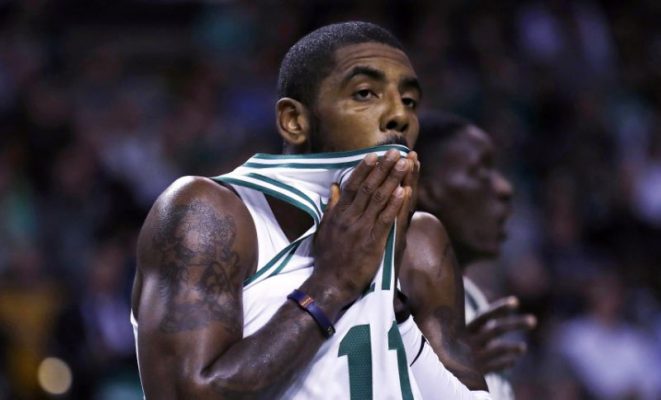 Former Cleveland Cavaliers point guard Kyrie Irving made news on Friday night when he was caught on video yelling profanities at a fan while walking out of the Boston Celtics locker room. While the incident certainly surprised some fans, it hasn’t seemed to surprise his former teammates.

According to The Athletic’s Jason Lloyd, Irving’s childish outburst was nothing new for those who used to play with him in Cleveland.

soooooo I totally missed this from Jason Lloyd on the how the Cavs felt about the Kyrie Irving incident over the weekend. whew. pic.twitter.com/sLmlUS05LS

The reported reactions from the Cavs players is eye-opening. While Irving likes to present himself as a thoughtful and profound individual when he speaks with the press, it seems there may be another side to the the 25-year-old All-Star that only those closest to him get to see.

Irving’s incredible talent on the court is undeniable. In his young career with the Celtics, he is already averaging 20.0 points, 5.7 assists, and 4.7 rebounds per game. The Cavaliers may miss his offensive ability, but it’s beginning to seem that they are perfectly fine with being rid of the baggage that comes along with it.