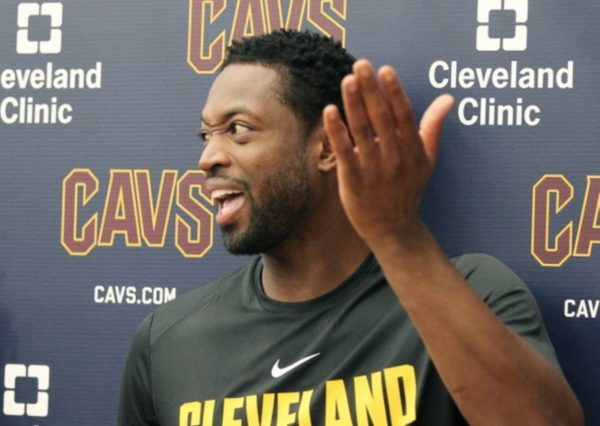 Kyrie Irving continued his petty criticism of the Cleveland Cavaliers and the city of Cleveland this week when he compared the sports culture in Boston to that in Cleveland. While most members of the Cavs have kept quiet regarding the drama Irving has created this summer, head coach Tyronn Lue and newly acquired shooting guard Dwyane Wade refused to let this one go.

On Wednesday, Irving couldn’t help but compare his new city of Boston to Cleveland:

On Friday, Lue responded to Irving’s latest dig at his former team:

“I don’t know. He can do what he wants to do,” Lue said Friday, when asked if Irving was trying to fan flames between his former and current team. “But we know in Cleveland, we got a great sports town in Cleveland. A great city, fans behind the teams 100 percent, so I’m happy to be here.”

It’s no surprise that Lue felt the urge to stand up for his team and fans. What was perhaps more surprising was that Wade, who has been a member of the Cavs for little over two weeks, did the same.

“I’ve always tried not to be too, me personally, oversensitive to what I read or what somebody says because I wasn’t there when they said it,” Wade told ESPN. “Because you just don’t know. Boston is a big sports town. It has the history there. And I think that’s one thing, if you want to read the quote, they have an amazing amount of sports history and all the championships from football to baseball to all four sports. I think, depending on how you want to take it. If you’re Cleveland and the way they were left, you read it one way. If you’re a sports fan somewhere else, you read it another way. So it just depends on how someone wants to take the quote when someone says it. Unless you were there and you heard it and saw his facial reaction and know how he really meant it. That’s how I look at things.”

He continued to try and offer Irving a more mature perspective.

“My thing has always been — even in Miami — first of all, you never know where you’re going to be, what’s going to happen, where you’re going to end up, who you’re going to be teammates with,” Wade said. “You just never know those things, so I never want to leave a place and talk s— about a place. Because when you were there, it was great, and then you leave, it’s terrible? It’s just like players. Fans celebrate players when they’re there, and then they leave, and it’s the worst thing. That’s not me. That’s not how I do things. I’m appreciative of what people have done for me, what organizations have done for me, and I hope they’re appreciative of whatever I can bring or whatever I’ve done — on and off the court. So, it doesn’t always go that way, but that’s the way I try to make it when I can control it.”

This certainly adds to the intrigue of next week’s season opener when the Boston Celtics come to Cleveland to face off against the Cavaliers. Surely, Lue, Wade, and the rest of the Cavs will look to prove to Irving just how great a sports town Cleveland is by defeating him and his new squad.