Video: Tyronn Lue Explains in Detail Why He Moved Kevin Love to Center 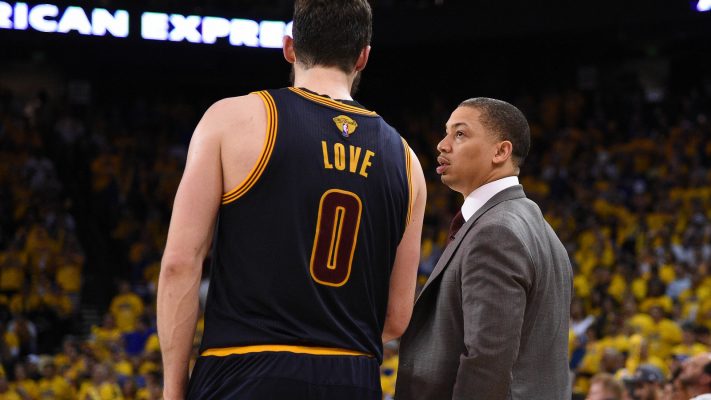 Earlier this month, Cleveland Cavaliers head coach Tyronn Lue announced that Kevin Love would begin the 2017-18 season as the Cavs’ starting center. The roster shake-up is certainly an intriguing one, and left many wondering what Lue had in mind for his new-look lineup. On Thursday, Lue joined ESPN’s “Mike & Mike” to explain exactly why he decided to move Love to the center position.

“When we made the trade adding Jae Crowder, I just thought that starting Jae at the three or the four, whatever the toughest matchup is at that position, that would give LeBron [James] a chance to be on the back line and kind of quarterback that defense, and talk, and be able to use his instincts in the passing lanes, being able to help guys because he’s very smart and he’s always going to be in the right spot,” Lue said. “That takes a lot of pressure off LeBron to have to guard the best player every single night.

“And then acquiring D. Rose (Derrick Rose) and D. Wade (Dwyane Wade), guys that, you know they’re not great three point shooters, so to give us spacing on the floor with D. Wade, D. Rose, and Tristan [Thompson] would’ve been a little harder.”

Lue continued to explain that he had come up with the idea shortly after the trade with the Boston Celtics took place. He also praised Thompson for being a consummate team player in graciously accepting his new role coming off the bench.

“I was going back and forth but that was my thought process over the course of the summer after the trade had happened,” he said. “That’s kind of how I envisioned it. Just going back and forth on it, and then once we got to training camp I made my final decision and I talked to Tristan who was great about it. He’s been a big part of everything we’ve done and for him to be just, he was great with it.”

As Lue explained, there are many potential benefits to having Love start at the center position. With the the 2017-18 season fast approaching, it will be fascinating to see if four-time NBA All-Star and the rest of the Cavs roster can turn that potential into a reality.