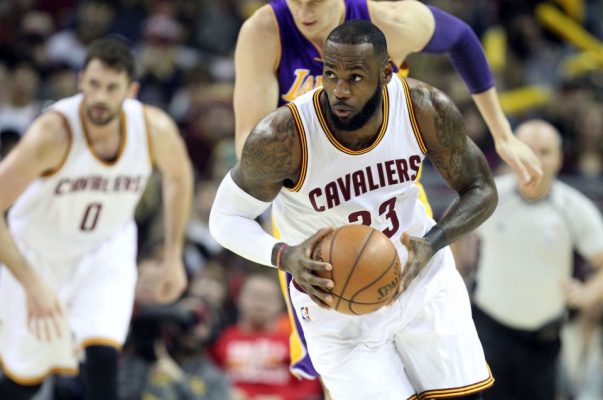 (Cleveland, OH) – LeBron James’ 16 fourth-quarter points helped the Cleveland Cavaliers hold off an upset bid by a gritty Los Angeles Lakers squad as the they came away with a 119-108 victory at Quicken Loans Arena on Saturday night.

James entered the fourth quarter having scored just 10 points, but his output during the fourth quarter allowed him to finish with 26 on the night. That was part of a 74-point night by the team’s Big 3 of James, Kevin Love and Kyrie Irving, who were all back after they sat out Wednesday night’s loss in Memphis.

“I just wanted to put an imprint on the game and I was able to make some plays,” James said afterwards.

James’ points were critical with Los Angeles trailing by just three at 108-105 with four minutes left. However, the Lakers went cold by missing seven of their last nine shots, which allowed the Cavaliers to put the game away with nine unanswered points. One of those baskets was a key 3-pointer from James.

Cavs head coach Tyronn Lue was asked about James’ performance during the fourth quarter and simply noted the veteran’s flair for performing in the clutch.

“I just think the game was close and he took control of the game, like we know he can do,” Lue said.

Assists were plentiful on both sides, with the Cavs and Lakers each finishing with 30 on the evening. One of the key reasons that Los Angeles managed to stay close was its 16 3-pointers, half of them coming from Nick Young.

Love was asked about Young, who finished with a game-high 32 points:

“When he gets going, he can really be a good player and tough to stop,” Love said.

Cleveland got off to an uncharacteristically slow start during the opening quarter. Leading through the entire first period, the Lakers managed to hold a 29-21 lead with 1:27 left to go before the Cavaliers made it 31-26 by the time the horn sounded.

The Cavs then appeared to be ready to take control by scoring the first 12 points of the second period and completing a 21-6 surge to hold a nine-point lead at 47-38 midway through the quarter. However, defensive problems cropped up again and resulted in Cleveland managing no larger than a seven-point lead the rest of the half.

The Cavs again started strong with an 11-3 push to start the third quarter before taking an 87-75 lead with 2:48 to go in the period. However, the Lakers managed to once again close the quarter strong with a 10-2 run to make it an 89-85 game with 12 minutes remaining.

“Sometimes you have nights like this,” said Irving. “You just have to grind it out.”

Irving hadn’t played since last Saturday, taking off the next two contests because of leg fatigue.

“This will probably be the only time in my career that I’ll get a week off, so I just took full advantage of it,” Irving said. “Regardless of what anyone says, the last year for me was a lot.”

The Cavaliers will head to Milwaukee for the first night of another back-to-back series, this one against the Milwaukee Bucks. That game will tip off just after 8 p.m. ET.