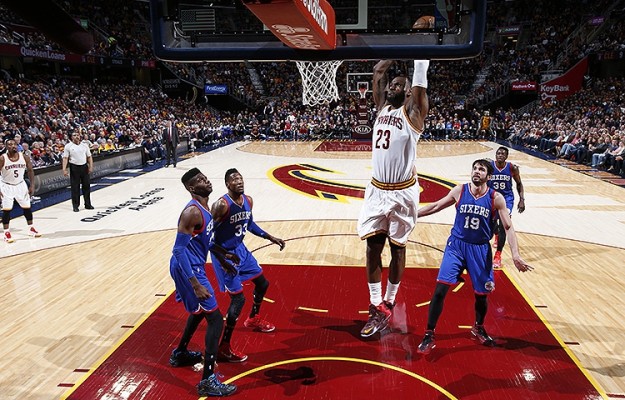 (Cleveland, OH) – In a game that went down to the final seconds of action, the Cleveland Cavaliers avoided a major upset with solid defense as they nipped the Philadelphia 76ers, 87-86 in Sunday afternoon action at Quicken Loans Arena.

The 76ers called timeout with 8.5 seconds left, but with 2.8 seconds to go, Nerlens Noel missed a shot attempt, allowing Tristan Thompson to grab the rebound. Cleveland immediately called timeout with one second to play, then got the ball inbounds past midcourt to come away with the tight win.

Cavs head coach David Blatt talked about Philadelphia’s final attempt, saying, “I don’t think that was their first option, but we took away the others.” He gave credit to the effort of the 76ers, saying, “They made some good runs and we didn’t play our best game.”

Blatt said about his team, “We were physically slow and mentally beaten down, but it was good that we were able to get the victory.”

Neither team was able to score in the final 3:57 of the game, but the win was the 16th straight victory at home for the Cavaliers and makes them 28-7 since January 15.

LeBron James led all scorers with 20 points. After the game, James said, “We’ve got to win all different ways. Good teams find a way to win.” James added, “Every game is an experience and we were able to win ugly.”

The entire fourth quarter was marked by defense and offensive struggles on both sides. Just 19 seconds into the period, the Sixers tied it at 72 on a three, then were able to stay close enough to put themselves in position to pull off what would have been a huge upset.

On a number of occasions, Philadelphia was in position to take the lead, including seven times in that final scoreless stretch. Key blows against them came when they missed all four of their free throw attempts.

However, the Cavs had just as much trouble putting the ball in the basket after Timofey Mozgov’s putback with 4:04 left. On five separate occasions, they had a chance to give themselves some breathing room, the last coming on an Irving miss on a jumper with 9.6 seconds left. The Sixers got the rebound and called time out to set up their ill-fated final effort.

Kyrie Irving said in postgame comments, “A lot of shots weren’t going for us, but we got the stops when we needed them.”

Early on, the opening six minutes of the first quarter was back-and-forth action, with the Cavaliers holding an advantage of 16-13. The Sixers ran off seven unanswered points to take a four-point lead, but the Cavs answered by notching the final 10 points of the quarter for a 26-20 lead.

Iman Shumpert was the big gun in that surge, sandwiching a pair of threes around a Kevin Love tip-in. However both of them ended up leaving the game due to injury: Shumpert with a jammed ankle and Love with continuing back issues.

Asked about his injury afterward, Love said he felt fine and that after getting some treatment during the game and over the next few days, he doesn’t expect to miss any time.

Prior to departing Love had collected a double-double with 10 points and 10 rebounds, while Shumpert scored nine points and grabbed three steals.

In the second period, Cleveland was able to maintain that advantage, with James and Thompson doing most of the scoring. As the quarter continued, the Cavaliers were able to boost the lead to as much as 10 at 53-43 with 1:42 to go before intermission. Those last two points came on a pair of free throws from Mozgov, who ran off eight straight points in less than three minutes.

After Philly hit a layup with 1:11 to go to make it 53-45, the two team’s offenses closed up shop and the Cavs went to halftime up by eight.

The 76ers started out fast after the break, scoring 11 of the first 14 points to tie the game at 56 less than three minutes into the clash. They had a chance to take the lead, but a turnover, followed by threes from Irving and Love over the next few minutes put a crimp in their momentum.

With Cleveland leading 64-58, Philadelphia scored five straight points and again had the chance to take the lead. That wouldn’t happen, but as the final quarter began, the Cavs were clinging to a slim three-point lead at 72-69.

Blatt attributed the sluggish performance to continued fatigue from their road-heavy schedule over the past six weeks. “These guys have been through a hellacious schedule, and it’s been shown to have an effect on them.”

The Cavaliers will be off until Thursday when they host the Miami Heat in a matchup that will be on TNT beginning at 8 ET.