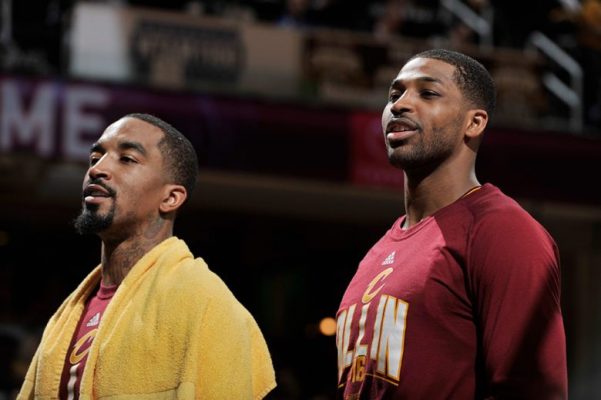 The Cleveland Cavaliers added a number of valuable players this offseason. While the team is arguably even stronger this season than they were last season, there will undoubtedly be a harrowing period of adjustment for some players.

The influx of talent has already forced J.R. Smith and Tristan Thomspon to deal with change as both players now find themselves left out of the Cavs’ current starting rotation. Both players admit the shift is a difficult pill to swallow, but they are also seemingly ready to accept their new roles and contribute to the team in any way they can.

According to Cleveland.com’s Joe Vardon, Smith is “absolutely” frustrated by the benching, but plans to embrace the new role and continue to contribute to the team. He said that he and Thompson recently discussed the roster changes.

Smith also told Vardon that he “kind of knew it” was coming, saying that LeBron James had spoken with Smith “way before” head coach Tyronn Lue made the announcement of the shake-up.

The shooting guard said he “was pretty much bracing [himself] for it” and likened the experience to something he went through while playing with the New York Knicks.

“Was working hard all summer and then coming in and not even really having a chance to earn my spot, but it’s alright,” Smith said. “It is what it is.”

The 2012-13 NBA Sixth Man of the Year did discuss what he actually enjoys about playing off the bench:

“I actually like playing on the second unit better, I’m more of a playmaker and distributor and I handle the ball a little bit more instead of just running to the corner.”

As for Thompson, he’s taking the changes in stride.

“Me and JR, we know what we’ve brought to this team, what we’ve done the last three years, being in three Finals,” Thompson said. “But at the end of the day, to win a championship you’ve got to sacrifice. We both know that and coming off the bench in that second unit, you gotta be a spark.”

He added that both he and Smith wanted “everybody to know” that they are not “upset or angry” about the moves.

Even James chimed in on the changes, saying he understands Smith’s disappointment, but knows he is willing to sacrifice for the team.

“Obviously, he’s a competitor, he wants to start,” James said. “Everyone would love to start but J.R. is in a position where he feels he wants to do whatever is best for the team. So if it’s playmaking if he’s out there with the second unit — you saw what he did tonight. If it’s giving up his starting job to D Wade (Dwyane Wade).

“It’s not about who starts or who comes off the bench, it’s about who all can make sacrifices to win a championship. And that’s what we’re all here for.”

The talent on the Cavs’ roster is something to be truly excited about. At many positions, there is not only one talented player, but two, and while that is great for the team overall, it is no surprise that some former starters will have to reacquaint themselves with coming off the bench. Still, if Smith and Thompson can practice what they preach and put their egos aside for the betterment of the team, the 2017-18 Cavaliers could be a truly special team.