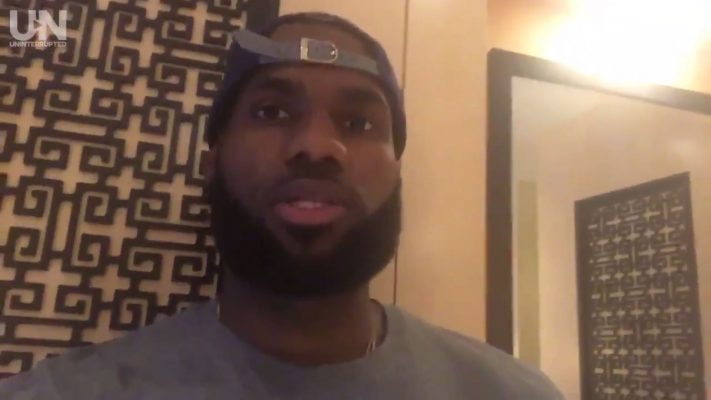 On Saturday, LeBron James used Twitter to voice his anger over President Donald Trump and his decision to withdraw his invitation to the Golden State Warriors to visit the White House.

His initial comments caused a media storm, and later in the day he joined Uninterrupted to expand on his feelings regarding his comments and the president.

"It’s not about dividing. We as American people need to come together even stronger.” — @KingJames responds to @realDonaldTrump’s comments. pic.twitter.com/UHpzXpb42K

“What’s up with y’all people,” James began. “Just giving y’all a little bit more in-depth insight about my tweet from earlier. You know, I think it’s basically at a point where I’m kind of just a little frustrated, man, just because this guy that we’ve put in charge has tried to divide us once again, and obviously we all know what we all know what happened with Charlottesville (North Carolina) and the divide that that caused. And now it’s even hitting more home for me now even more because he’s now using sports as the platform to try to divide us.”

James later continued to explain why he felt the need to speak up.

“You look at him kind of asking the NFL owners to get rid of players off the field because they’re exercising theirs rights and that’s not right,” he said. “And then, you know when I wake up I see that a colleague of mine has been uninvited of something that he said he didn’t even want to go to in the first place, you know to the White House. That’s just something I can’t stand for, man.”

He concluded with a powerful message.

“It’s not about a division, it’s not about dividing. We, as an American people need to actually just come together even more stronger, man,” he said. “This is a very critical time and me being in the position I am I had to voice this to y’all, so, love y’all.”

This is not the first time James has used his massive platform to express his beliefs, or the first time he has been critical of Trump. While other sports stars stay quiet, it’s impressive to see James continuing to make his voice heard.