Video: LeBron James and Dwyane Wade Seen Working Out Together in Los Angeles 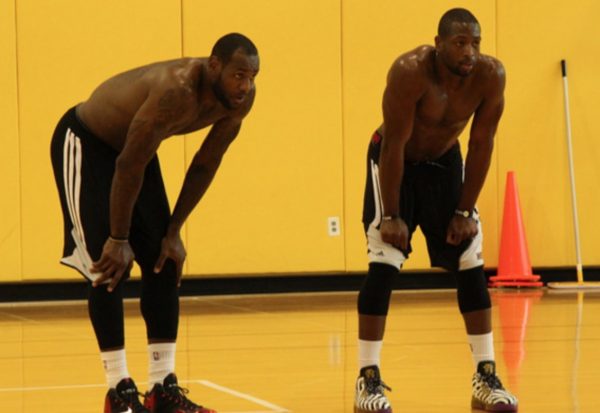 Dwyane Wade and the Cleveland Cavaliers have been linked to one another ever since it was reported that Wade is likely to be granted a contract buyout from the Chicago Bulls.

On Monday, Wade was seeing working out with LeBron James in Los Angeles and according to Cleveland.com, at least one member of the Cavs’ player development staff was present as well, putting the two All-Stars through drills.

James added to the excitement by posting a video of the two together on the court:

“Always great when I can link back up on the court and put some work in with my brother @dwyanewade,” James captioned the video. “It just feels different.”

Always great when I can link back up on court and put some work in with my brother @dwyanewade!! It just feels different. #Brotherhood✊? #striveforgreatness? #WorkTilItHurtsandBeyond?

James has taken the court with many stars around the league this offseason. With his and Wade’s workout coming just one week before James hosts his Cavs teammates for a pre-training camp workout, it may be a bit of foreshadowing into the duo’s future.

The Cavaliers have endured one of the most dramatic NBA offseasons in recent memory. If Wade were to be granted a contract buyout and sign with the Cavs, however, it would all be worth it.