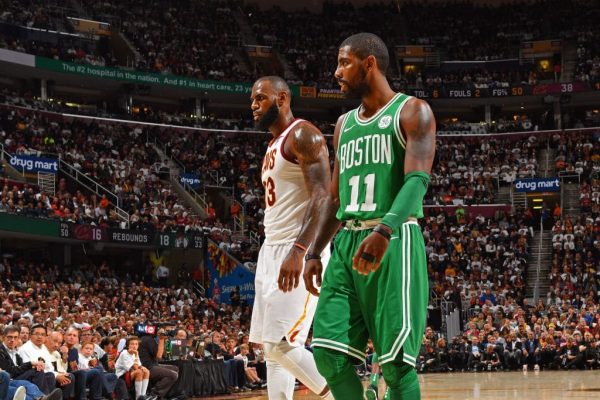 The relationship between both Kyrie Irving and LeBron James, now former members of the Cleveland Cavaliers, was seemingly always something that was worthy of conversation. That conversation increased even more when Irving asked in July 2017 to be traded away from the Cavaliers because of James’ dominant presence.

Howard Beck of Bleacher Report’s lengthy article on Irving looked into the eighth-year point guard’s personality and decision-making process. Irving indicated that his trade request to get away from James, which eventually led to a deal to the Boston Celtics, has turned out to be a great decision.

“I think it was the best thing I’ve done, honestly,” Irving said.

Shortly before James decided to return to the Cavaliers in July 2014, Irving agreed to a contract extension with the team. At the time of his deal, Irving was expecting to serve as the cornerstone of the Cavs, an idea that ended when James and Kevin Love were added during that offseason.

During the time Irving and James were together in Cleveland, there were instances where James criticized Irving’s play, specifically related to his assists totals. Many of those times came during the duo’s first season together, when they occasionally had issues being in sync.

The pair eventually found its groove over the next three years, helping lead the Cavaliers to a trio of Eastern Conference titles and a 2016 NBA championship. That league title was won when Irving hit the game-winning shot in Game 7, though it was James who ultimately won finals MVP honors. One year later, sensing that he would continue to remain in James’ shadow, Irving made the trade request.

Now ready to begin his second season with the Celtics, Beck notes that Irving has a greater sense of freedom away from James:

“Joining a younger, less decorated roster has given Irving the latitude to lead and express himself in a way he never could in a locker room dominated by LeBron and a crowd of veterans in Cleveland.

‘Just be you,’ Irving says, smiling and chuckling slightly at invoking his own commercial mantra. ‘It finally hit me. It finally hit me at 26 years old, eight years in.'”

Irving didn’t play in either of last week’s preseason games between the Cavaliers and Celtics, with his first scheduled opportunity to face the Cavs this season coming on Nov. 30 at TD Garden in Boston.