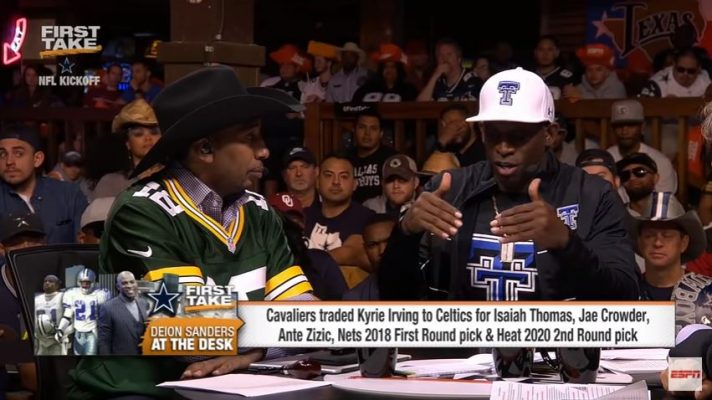 On Friday, NFL Hall of Famer Deion Sanders joined ESPN’s “First Take.” When the topic of the recent blockbuster trade that sent Kyrie Irving to the Boston Celtics came up, Sanders did not mince words. The former two-sport athlete was highly critical of Irving’s reasons for no longer wanting to play for the Cleveland Cavaliers.

“Why leave? You misconstrue what the King (LeBron James) brings to the game. The King is so good that you’ve been to the Finals back to back to back and you start thinking that this is normalcy,” Sanders said. “Have you lost your mind? This ain’t normal. The only thing normal about this is the King, alright? I have never seen a dog leave to go elsewhere. (John) Stockton didn’t leave Karl Malone, Magic (Johnson) didn’t leave Kareem (Abdul-Jabbar). The reason…he has to understand, you’re Robin, not Batman.”

Later, when co-host Stephen A. Smith claimed that the drama between Irving and James began when James refused to answer Irving’s calls, Sanders tried to put things into perspective:

“First of all let’s put the bull junk and the pettiness down, brothers, and let’s get together and do this. You only have one shot together to do this against them grown men over there in the Bay. You gotta to do it together you can’t do it separately.”

See the rest of the conversation below.

Now that Irving has in fact been traded by the Cavs, arguments like these have become something of a moot point. Still, it’s refreshing to see a former athlete like Sanders hold nothing back and let fans know how he really feels.