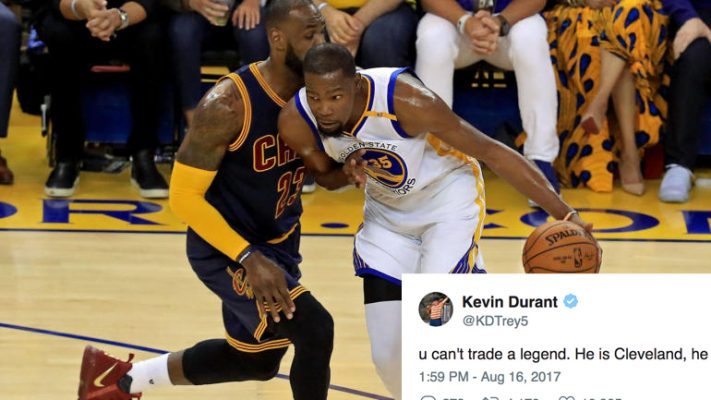 If anyone knows what it’s like to face the kind of internet and media scrutiny that LeBron James has faced through his career, as rumors regarding his upcoming free agency continue to develop, it’s Kevin Durant of the Golden State Warriors. That might explain why Durant took to social media to support James when rapper Lil Dicky tweeted out about James’ future with the Cleveland Cavaliers.

In the first tweet, the rapper argued that the Cavs would be wise to trade James, but Durant knows that James means much more to Cleveland than just his contributions on the court.

u can't trade a legend. He is Cleveland, he gets to hold the cards

The conversation continued as the two shared their thoughts on the complex relationship between James and Cavs owner Dan Gilbert.

I feel what you're saying. Most owners think that way, but then you realize it's lebron james.

Lil Dicky then explained that he thinks it would be best for the Cavs to blow up the team on their own terms before James potentially leaves Cleveland high and dry next offseason, but Durant predicted a more positive outcome.

last time he left they got like 3 number one picks. So either way they are good lol

Despite what these two think, it’s nearly unfathomable to imagine Gilbert and the Cavs actually trading away James when he still has one year left on his current contract, which includes a no-trade clause. Still, it’s clear through his interaction with Lil Dicky that Durant rightfully holds James in the highest regard when it comes to his fellow players in the NBA.