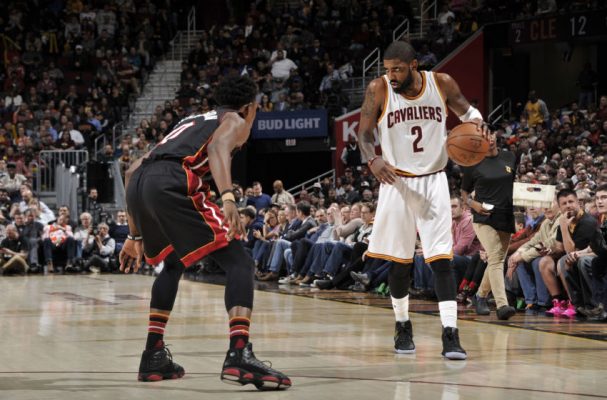 As the Cleveland Cavaliers continue to deal with the fallout from Kyrie Irving‘s recent trade demand, the Miami Heat may be officially putting their name in the hat of potential trade suitors.

According to ESPN‘s Adrian Wojnarowski, the Heat are willing to deal their current starting point guard Goran Dragic and talented youngster Justise Winslow in return for Irving:

“The Heat are willing to part with Goran Dragic and Justise Winslow as centerpieces for an Irving trade.”

Wojnarowski added, however, that these two players alone may not be enough to land the disgruntled All-Star:

“With the Cleveland-Miami history, there’s little chance for a deal unless the Heat offered an overwhelming package.”

Wojnarowski is known to be one of the most credible NBA insiders around, but shortly after he reported on the potential trade, Sun Sentinel reporter Ira Winderman took to Twitter to refute the report:

Heat denies ESPN report of offering Dragic and Winslow to Cavaliers for Dragic. Say no offer of any type has been made.

There is no way of truly knowing what kind of discussions the Cavs and the Heat have had regarding Irving’s availability. One thing is certain, however, trade rumors like this one will likely continue until Irving is shipped off to another team.