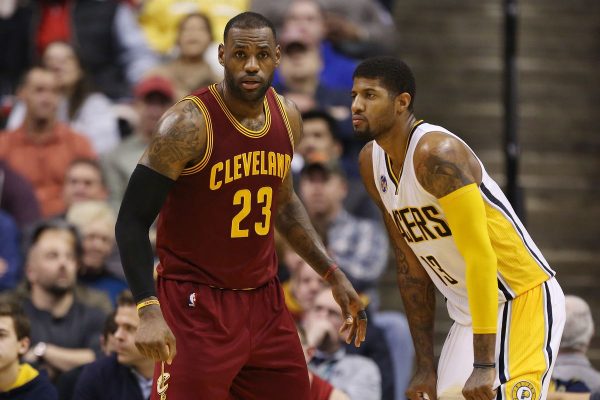 With the Cleveland Cavaliers‘ front office organization up in the air, making heads or tails of potential moves has turned into a mixed bag. Though trade talks for Indiana Pacers forward Paul George have simmered, specifically because of the two-way star’s wish to land with his hometown Los Angeles Lakers, insider Sam Amico of AmicoHoops.net is saying the Cavs are still very well in the mix for the Pacers superstar.

Contrary to some reports, #Cavs still in on Paul George, I'm told. Again, #Pacers said to be hopeful of moving George by tomorrow at latest.

This also suggests that the Lakers’ current offer (two first-round picks in addition to Julius Randle or Jordan Clarkson), or any other team’s proposal, hasn’t fit Indiana’s bill, giving the Cavs operating room to rework their offer before tomorrow night’s draft. The Lakers currently hold the No. 2 overall pick in the 2017 NBA Draft.

The Pacers have made it known that they covet a high draft pick for George. As for the Cavs, there’s an understanding that George would come to the team as a “rental,” without any promise of signing long-term.

A deal for George would likely mean the departure of power forward Kevin Love, who’s owed over $72 million over the next three seasons. They likely want to get out from under his contract, especially if they believe LeBron James will take his talents westward after next season.

featuredNBA Draftnews tickerPaul George
← Previous Story Report: Cavs Players Warning Jimmy Butler to Stay Away From ‘Volatile Situation’ in Cleveland
Next Story → Chauncey Billups May Not Accept Role as Cavs GM Due to These Two Reasons