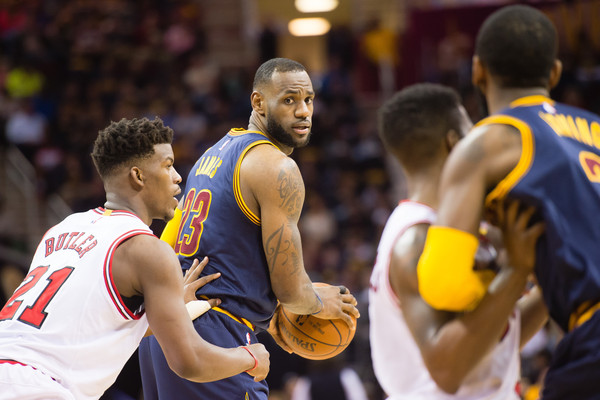 The dramatic twists and turns that have come about with the Cleveland Cavaliers both before and after the departure of former general manager David Griffin once again surfaced on Wednesday morning. That’s when a media report indicated that Cavaliers players were instructing Chicago Bulls small forward Jimmy Butler to stay away from a potential volatile situation with the team.

Joe Cowley of the Chicago Sun-Times, had originally offered the information about Butler and Cavs players both wanting a trade to happen. Just 24 hours later, Cowley wrote that the current chaos surrounding Cleveland’s franchise could lead to Butler getting stuck in a rebuilding situation within a year or two:

“According to a Cleveland source close to the situation, several of the Cavaliers who had been prodding Butler to push for a trade from the Bulls the last five days were now warning him to stay away from a suddenly volatile situation,” Cowley wrote.

In addition, Cowley indicated that the close friendship between LeBron James and Bulls guard Dwyane Wade undoubtedly made known James’ feelings about the Griffin departure:

“Wade also is close to James, so he likely knew about how upset James has been after Griffin was let go by Cleveland ownership.”

Given that the free-agency period begins in just 10 days and the status of James in Cleveland past the 2017-18 season has become much less certain, the roster changes being sought could be more difficult to undertake. That could have a devastating effect on the chances of the Cavaliers once again dethroning the Golden State Warriors as NBA champions.