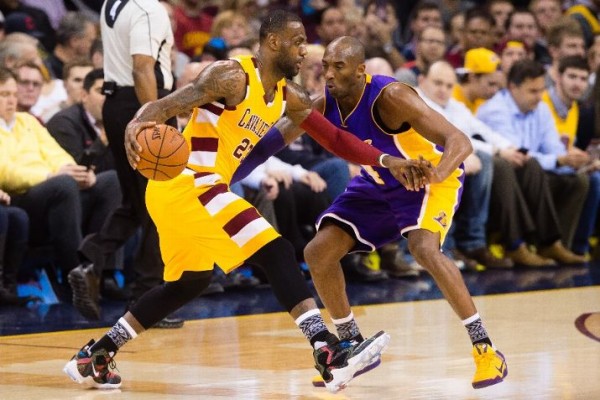 In his final game in Cleveland, the five-time NBA champion walked off the court to a standing ovation from the crowd, as Bryant scored 17 points, nabbed six boards and dished out three assists.

“That’s how it’s supposed to be,” said Cavs small forward LeBron James, who had a monster night with 29 points, 11 rebounds and seven assists. “A guy like that whose done so much for this league, the Lakers organization and for all the fans around the world that’ve watched him over the last 20 years. Well respected, not only here in Cleveland and in Los Angeles, but all around the world. It’s all love, man.”

Over the years, James continues to publicly express his admiration for Bryant, noting that he loved watching him while growing up.

“Anytime I even watch his games, even when I’m not playing him, it’s always like very emotional just knowing it’s his last hurrah,” James said. “It’s going to be really cool to see him for sure. I know our fans will give him a great reception, well deserved.”

Although Cavs point guard Kyrie Irving stole the show with a game-high 35 points and seven assists, the night was overshadowed by power forward Kevin Love re-injuring his surgically-repaired left shoulder.

However, Love believes his injury isn’t too serious and he shouldn’t miss significant time going forward.

“At the time I didn’t really know what it was. Just like when you get hit in the funny bone or the elbow, it felt like fire was running down my arm. It’s just a stinger,” Love said. “The doctor decided to just be cautious and use the break for it to feel better, but it actually feels OK right now.”

Before he exited after 20 mins of play, Love had eight points, six rebounds and three assists. In his absence, center Tristan Thompson stepped up to score 15 points (a perfect 6-of-6 shooting from the floor and 3-of-3 from the free throw line) to go along with 13 rebounds and four assists.

The Lakers, who trailed by as many as 22 points in the second half, were led by shooting guard Lou Williams’ 28 points and four boards as well as point guard Jordan Clarkson’s 22 points and seven assists. Rookie guard D’Angelo Russell, who was selected by the the Lakers with the second overall pick in the 2015 NBA Draft, finished the night with 15 points and three assists off the bench.

Up next, the Cavs will have seven days off before their next regular season game when they host the Chicago Bulls (27-24) on February 18th at Quicken Loans Arena. The contest, which is scheduled to tip off shortly after 8:00 pm ET, will be broadcast live nationally on TNT.