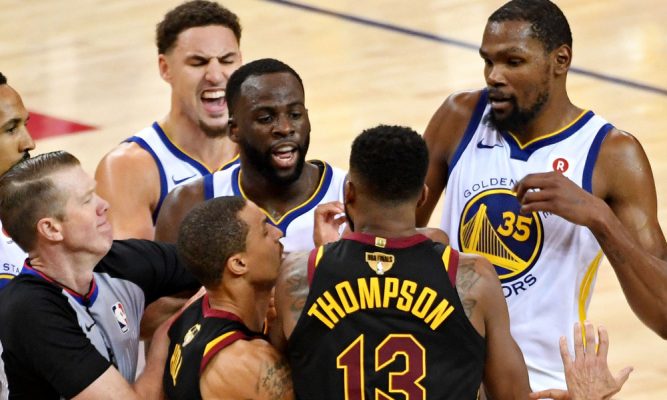 The bad blood between Cleveland Cavaliers center Tristan Thompson and Golden State Warriors forward Draymond Green that was on full display during this year’s NBA Finals apparently hasn’t subsided since the Warriors completed a four-game sweep of the Cavaliers on June 8. That’s because one report indicates that a scuffle between the two erupted back on July 18.

The gossip website Bossip wrote that the apparent incident took place that night at the Delilah nightclub in Los Angeles following the ESPY Awards. During a private party at the establishment, Thompson apparently won the battle by hitting Green, with any further trouble stopped by the efforts of Thompson’s former teammate, LeBron James, and Green’s teammate, Kevin Durant. James then was reported to have left soon afterward.

Draymond went up to apologize to Tristan for what happened after G4 of the finals. TT said ‘nah man’ and Draymond tried again, ‘come on, I didn’t mean it’ and then WHAP, Tristan leveled him with a punch. Draymond didn’t go down.

Draymond Green was not the aggressor, he was trying to make peace. Tristan felt embarrassed by the end of the Finals diss moment and just unloaded. Couple players i spoke here in LA/on social media went with, "about time"

In the closing moments of Game 1 of this year’s Finals, Thompson was ejected from the contest, which led to Green mocking his exit. That resulted in Thompson then taking a swing at Green and nearly led to an on-court brawl. Thompson was fined by the league for his actions. Nine days later, with the teams shaking hands after the Warriors’ Game 4 victory, Green dismissively waved away Thompson.

Neither the Cavaliers nor Warriors have offered any comment on the alleged incident and will most likely attribute the situation to a one-time event. Next month, the NBA will release the 2018-19 league schedule, which will indicate when the two teams will face each other during the regular season. Given the Cavs’ loss of James to the Los Angeles Lakers, the once-prominent nature of the matchup has undoubtedly diminished in the eyes of the schedule-makers. However, it appears that the once-bright spotlight on this rivalry may instead focus more closely on the interactions between Thompson and Green.