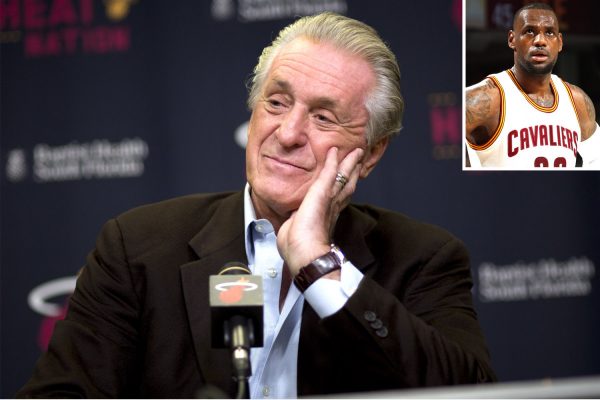 The Cleveland Cavaliers attempted to satisfy their need for an additional playmaker this week by signing former Miami Heat forward Derrick Williams to a 10-day contract.

Williams became available earlier in the week when he was waived by Miami, the team where Cavs superstar LeBron James had won two titles between the years of 2010 and 2014.

Since James’ departure from the Heat in 2014, there have been rumors of bad blood between the three-time NBA champion and Heat executive Pat Riley. Now, a report from Jason Lloyd of Ohio.com about the Williams signing suggests the beef between the two may be even bigger than previously thought:

“It’s fair to wonder if Riley would’ve been so accommodating had he known Williams would wind up here. After all, this is the same Pat Riley who a couple years ago nixed two separate, three-team trades at the deadline that ultimately would’ve brought Norris Cole to Cleveland, according to sources. Riley killed both deals when he learned they would help LeBron James and the Cavs.”

Riley was so adamant about not helping his former superstar that he totally abandoned two trades just to keep Cleveland from getting guard Norris Cole, James’ former teammate who stuck around in Miami until he was dealt to the New Orleans Pelicans at the trade deadline in 2015.

The Heat have now seen their relationship sour with not just James, but his two star teammates who helped bring the Heat back-to-back titles, Dwyane Wade and Chris Bosh. Wade left the Heat as a free agent to join his hometown Chicago Bulls, and Bosh has been sidelined with blood clots despite insisting that he is able to play.

It’s clear that Riley has a history of butting heads with his big name players, but what’s unclear is if he is giving all of his former stars the treatment he is reportedly giving James, or if the four-time MVP is a special case.