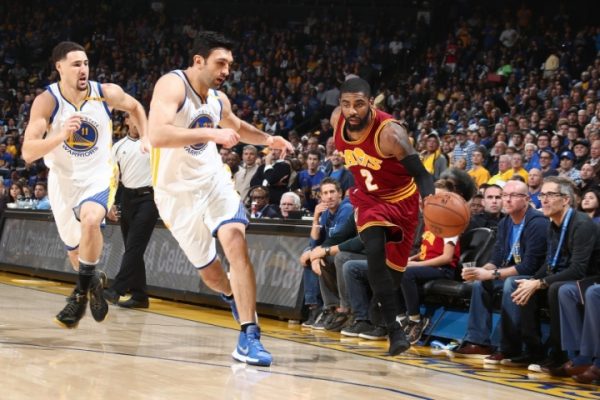 (Oakland, CA) – Digging themselves a massive hole in the first half helped doom the Cleveland Cavaliers as they ended up on the receiving end of a 126-91 defeat courtesy of the Golden State Warriors at Oracle Arena on Monday night.

A slow start by the Cavaliers saw the Warriors score the first seven points of the game, with the Cavs missing six of their first eight shots from the field and committing three turnovers in the first three minutes. To compound the situation, Kyrie Irving picked up a pair of early fouls that kept him on the bench for a good portion of the period.

Golden State led by 14 at 36-22 after the first quarter — aided by Cleveland’s 30 percent shooting from the field — and held a commanding 13-1 edge in assists. During the second quarter, the Warriors connected on 75 percent of their shots from the field to open up a commanding 78-49 halftime lead.

During that second period, Golden State began by building their lead up to 22 before Cleveland began to make an effort to come back. The Cavaliers managed to get the margin down to 14 at 60-46 following a pair of free throws from LeBron James with 4:07 left before halftime.

However, the Warriors put the game away with an 18-3 run that was capped by a 3-pointer at the buzzer by Golden State’s Stephen Curry. The key to this push was Golden State hitting 7-of-8 from the field while the Cleveland missed 4-of-5 attempts. Many of those Warrior baskets came on dunks or layups, as they finished the half by collecting 26 assists.

Kevin Love sat out the second half due to lower back tightness, with Warriors building their lead to 36 before the Cavaliers closed the third quarter with a 13-1 run to make it a 95-71 game. Love finished with just three points and three rebounds in 16 minutes.

In the final quarter, Cleveland had reduced their deficit to 22 at 99-77 with 10:06 left before Golden State ran off 14 unanswered points to officially begin garbage time. The Warriors would eventually build their biggest lead to 39 on two occasions in the final minutes.

“The biggest thing with those guys is their team, they play every night,” Cavaliers head coach Tyronn Lue said about the Warriors on Sunday. “They don’t rest, they play every single night and they’re ready to go, so. Their chemistry is down (pat), they’re playing at a high level.”

If there’s any solace to be gained from this pounding, it’s that last year on Martin Luther King Jr. Day, the Cavaliers also lost badly to the Warriors in a 132-98 rout. The two teams then met in the NBA Finals and the Cavs emerged with the Larry O’Brien trophy in a seven-game thriller.

The Cavaliers finish their six-game road trip with a 3-3 mark and return to action on Thursday night at Quicken Loans Arena with a game against the Phoenix Suns. That game is set to tip off just after 7 p.m. ET.