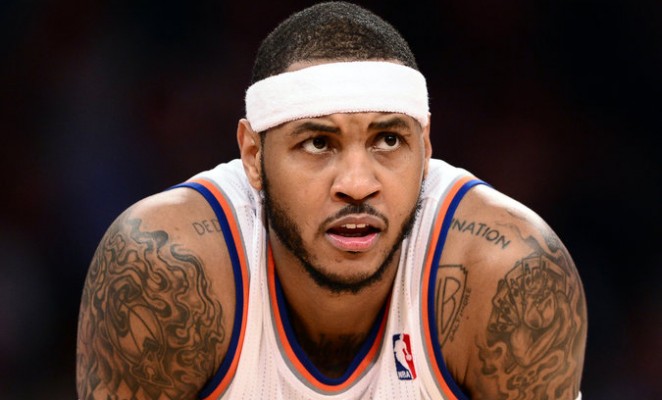 In the aftermath of a rumored trade of Cleveland Cavaliers’ forward Kevin Love, one of the other supposed principals of the ill-fated deal, Carmelo Anthony, made clear that he had no intention of donning any uniform other than his current New York Knicks jersey.

The alleged deal, was supposed to send Love to the Boston Celtics, Anthony to the Cavaliers and Timofey Mozgov to the Knicks, with draft picks also mixed in. Due to his refusal to waive a no-trade clause in his contract, Anthony would have put an end to the deal anyway if it had ever gotten past what had been described as the “very preliminary” discussion stage.

The New York Post noted that Anthony spoke during All-Star Game festivities in Toronto on Saturday about whether he was ready to waive the no-trade clause:

“Not at this point,” Anthony said. “I dealt with that [Friday]. My answer and my feeling don’t change in 24 hours. So not at this point. I’m not even thinking about that.”

Putting his focus on playing for the Knicks, Anthony expressed frustration about the speculation:

“There’s always some trade s–t going on. … I’m not going anywhere. It sucks. I’m tired of these rumors, man. I’m tired of them,” Anthony said. “I don’t want to run. I could have run somewhere when I was a free agent. I came back for a reason. I don’t feel like I got to keep expressing that part of why I came back to New York.”

Despite his longtime close friendship with LeBron James, Anthony showed little interest in becoming part of a potential championship team in Cleveland, while continuing to express his annoyance with rumors:

“Doing it in New York is better than doing it any place in the world,’’ Anthony said. “One in New York is better than multiple somewhere else. That was the reason I wanted to come to New York. That’s the reason I’m in New York. It just bothers me when I start hearing all these trade rumors. Nobody has talked to me. I don’t know where it comes from. Sometimes it gets to you. As a player you get tired of hearing something all the time.”

Anthony’s focus on winning in New York differed from his comments on Friday, when he was asked about again potentially missing out on playoff basketball:

“That doesn’t sit well with me,’’ Anthony said. “To reflect a little about that, it’s tough. To think about that, to know that it can be three years if we don’t pick it up right away. I try not to think about it right now. In actuality, you have to start thinking about that eventually.”

James had already stated that the would-be deal had no basis in fact.