Is Timofey Mozgov Cracking Under the Pressure? 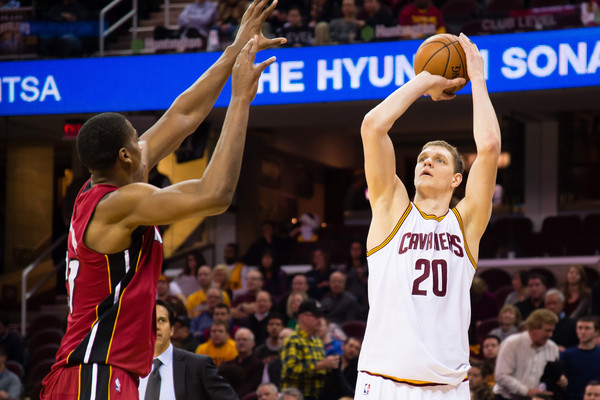 The possibility of a massive pay raise awaits Cleveland Cavaliers’ center Timofey Mozgov after this season, netting him in the range of $15 million per season.

But a slow start to the 2015-16 campaign has some debating as to whether the pressure of justifying such a contract is affecting his play.

One of those people is Cleveland Plain Dealer beat writer Chris Haynes, who recounted Mozgov’s miserable performance in just nine minutes of play during the Cavaliers’ Tuesday night loss to the Washington Wizards. During that short span, Mozgov committed a pair of early fouls and four turnovers, and also missed a trio of close shots.

Haynes speculates that the heightened pressures of not only getting back to the NBA Finals, but winning them could also be a source of Mozgov’s problems. That laser-like focus has been emphasized by teammate LeBron James.

Mozgov, currently making $4.95 million, missed three games last month due to a shoulder injury, but was already coming off of knee surgery over the summer. That short time frame to rehabilitate his knee has generally been seen as the main reason for offensive numbers that haven’t been this low since he became a full-time center two season ago.

In 15 games, Mozgov has played 295 minutes and is hitting just 45 percent of his shots, compared to the 59 percent he shot with the Cavs last year. As a direct result, his scoring average has fallen from 10.6 to 7.0 points per game. More alarmingly, his rebounding average has dropped from 6.9 as a Cavalier last season to 4.4 this year.

“I think it’s fairly clear that right now, he’s not at the same level physically that we’re used to seeing him, and we’ve got to get him there.”

While the possibility of a lineup change exists, the only two real options are Tristan Thompson, who is primarily being used off the bench and Anderson Varejao, whose injury history can’t guarantee too many minutes. The only other option would be Sasha Kaun, who has seen virtually no action all season.

The Cavaliers will next be in action on Friday night when they travel to face the New Orleans Hornets in a game set to tip off just after 9:30 p.m. ET.