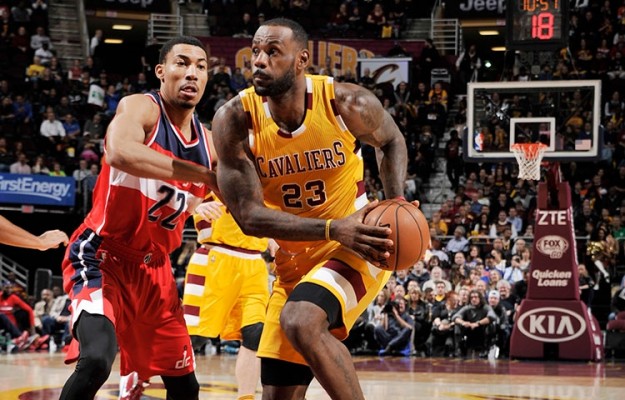 (Cleveland, OH) – A combination of sloppy play and poor shooting proved to be a recipe for disaster for the Cleveland Cavaliers as they suffered their first home loss of the 2015-16 campaign by falling to the Washington Wizards, 97-85, on Tuesday night at Quicken Loans Arena.

The Cavs, who dropped to 14-4 on the year, were hammered in the paint, ending up on the short end of a 44-22 tally in that area. That allowed the Wizards, who came into the clash sporting a four-game losing streak, to improve to 7-8 on the season.

Cavaliers head coach David Blatt spoke about some of those issues after the game:

“I didn’t feel we were ready to play.  We didn’t get back on defense and we gave up the ball too much.”

“They just beat us from beginning to end in every facet of the game. They were quicker and faster to the ball.”

Ending the night with 18 turnovers, compared to just 15 assists, and 34 percent shooting from the field proved to be the deadliest numbers on the evening for Cleveland, with those 19 turnovers leading to 25 points for Washington. The duo of J.R. Smith and Kevin Love endured an especially rough shooting night, combining for a 5-for-23 night from outside.

The signs for the defeat were evident from the opening tap when the Wizards notched the first 10 points, but ultimately reached its peak when they took a 22-point lead during the third quarter. The remainder of the game was a desperate attempt of trying to come back for the Cavaliers, a push that effectively stalled at the halfway point of that deficit.

While James collected a double-double with 20 points and 12 assists, he also had a miserable night in the turnover department with nine in that category.

Cavs center Timofey Mozgov was another player who struggled, not scoring at all and hauling down just two rebounds. Asked about his struggles since returning from injury, Blatt explained that Mozgov was still not 100 percent:

“I don’t think we have him at full strength yet. He has to push the envelope and we have to push him.”

A wildly inconsistent first half saw Washington score those first 10 points of the game before the Cavaliers went on a 14-4 run to tie things up. However, they would never hold a lead during the game, with the Wizards eventually boosting their lead back up to 14 with 2:28 to go before end of the opening half.

That push was during a 17-7 run by Washington that closed out the final 8:30 of the half, with the Wizards heading to the locker room holding a 54-43 advantage. Their chief weapon was guard John Wall, who hit for 21 of his 35 points in the first half.

Mo Williams, who had the misfortune of trying to guard Wall, ended the night with 12 points and spoke about how the Wizards were able to take control:

“They jumped the game up, changing lineups, and we didn’t handle it well. Tonight was one of those nights, you just couldn’t get a flow.”

Blatt spoke about Wall’s evening that saw a number of Cavs players try to slow him down, and about the night in general:

“We didn’t do a good job, regardless of who we had on him. We just didn’t play a good game and Washington did. That’s what happens when you play in this league.”

That hole got even deeper in the first three minutes of the third quarter when Washington tallied the first eight points to make it a 19-point margin at 62-43. It eventually became 69-47 with 5:46 left in the period before the Cavaliers were able to get it down to 13 at 80-67 when the horn sounded.

Cleveland would get as close as 10 in the last quarter, and in the closing minutes, had four separate chances to get the deficit into single digits, but came up short each time.

James mentioned that a greater focus was needed by the Cavs in the future:

“We have to improve in a lot of facets of our game to get better, and we can’t afford to take a night off.”

Next up for the Cavaliers will be a Friday night road matchup in New Orleans that will tip off just after 9:30 p.m. The later start is because the game will be broadcast nationally on ESPN.