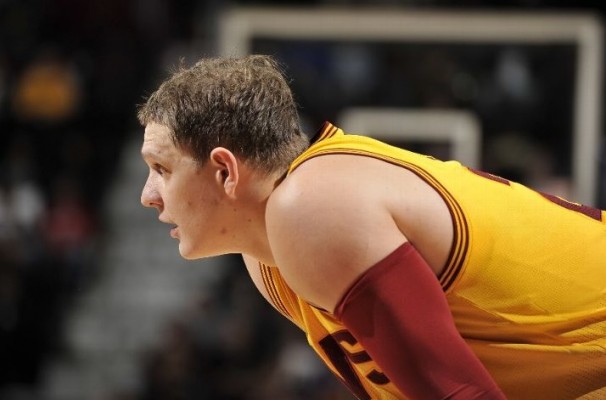 (Cleveland, OH) – Plagued by turnovers throughout the game and unable to dig themselves out of a huge early hole, the Cleveland Cavaliers fell to 0-5 in the preseason following a 107-85 defeat to the Indiana Pacers at Quicken Loans Arena on Thursday night.

The night began in dismal fashion as the Cavs fell behind by 18 in the opening stanza, and ended up finishing the evening with 23 turnovers. In addition, Indiana controlled the boards throughout the contest, especially on the offensive side, ending the night with a 48-34 advantage.

In truth, it was another depleted lineup for the Cavaliers, with LeBron James sitting out for some rest prior to the start of the regular season. Meanwhile, Matthew Dellavedova was kept out due to ankle soreness.

Timofey Mozgov led a trio of Cavs who finished scoring in double figures with 16, while also adding six rebounds. Just behind him was Richard Jefferson with 14 points and two steals, while J.R. Smith returned to the lineup with 10 points and five assists.

One other prominent statistical performance came from free agent Jared Cunningham, who tallied eight points and dished out eight assists.

The two teams traded some early baskets, with Indiana holding a 9-8 advantage, before the Pacers ran off 15 unanswered points. Jefferson broke the cold spell for the Cleveland, only to see Indiana answer with four more points to hold a 28-10 advantage.

To that point, the Pacers had connected on 10 of its 15 outside shots, while the Cavs managed to connect on just four of their 12 field goal attempts. One of the key issues in that first quarter was the eight turnovers committed by the Cavs

The Cavaliers’ shooting fortunes changed in the final three minutes of the quarter. Cleveland hit half of their six shots while keeping Indiana scoreless on four missed tries from the field for a 28-16 score after the first 12 minutes.

The second quarter also started in miserable fashion, with the Pacers tallying 10 of the first 13 points, boosting the Indiana advantage to 19 at 38-19. That margin eventually reached 20 at 48-28 with just under four minutes to go before intermission, with the Cavaliers only able to chop the deficit to 15 at 53-38 as the halftime horn sounded.

The third quarter proved to be no better as the Cavs again fell behind by 20 after getting no closer than 12 on multiple occasions. Eventually, they were able to get back to where they started at the start of the quarter, trailing 73-58.

A sluggish fourth quarter filled with reserves on both sides actually saw the margin get worse for the Cavaliers until the final buzzer sounded.

The Cavaliers will next be in action on Sunday night in Toronto when they take on the Raptors in a game set to tip off just after 6 p.m. ET. James’ status is uncertain, but perhaps more importantly, Kevin Love is expected to see his first action of the preseason.