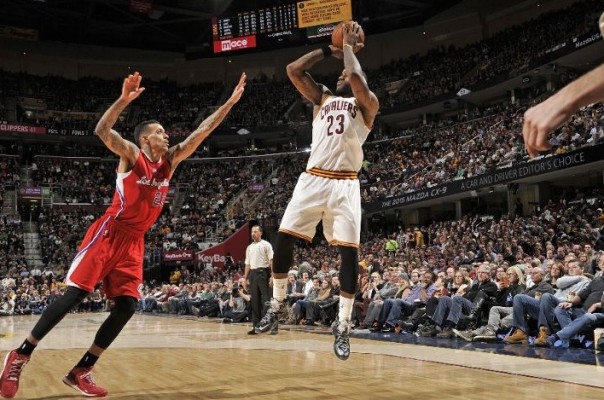 (Cleveland, OH) – Leading virtually from start to finish, the Cleveland Cavaliers increased their winning streak to 12 games as they easily dispatched the Los Angeles Clippers in a 105-94 victory on Thursday night at Quicken Loans Arena.

The final score was not indicative of the overall game, which saw the Cavaliers lead by as many as 32 in the latter stages of the third quarter. The one-time blowout came in a game that was expected to pit two of the top teams in the NBA, and marked the first of a brutal four-game-in-five-day road stretch for Los Angeles.

All five Cavaliers starters scored in double figures, led by Kevin Love with 24 and LeBron James with 23. Love added nine rebounds, while James dished out nine assists. Overall, the quintet ended up scoring 85 of the team’s 105 points.

As frigid as the outside temperatures were (four degrees), the Cavaliers were just the opposite in the first half, shooting from the perimeter at a 60 percent clip. Meanwhile, their defense clamped down on the Clippers, who were especially impotent from long range during the opening two quarters, hitting just one of nine attempts. The second half was only slightly better for Doc Rivers’ crew as they hit just five of 22 from deep in the Q.

James commented afterward about the improvement of the team’s defense, saying, “Our personnel, it fits what we want to do against most teams.” James added, “It’s not always perfect, but when you cover for each other, it looks good.”

The Clippers took a 2-0 lead on a Jamal Crawford jumper 17 seconds into the clash, but after a Love jump hook 20 seconds later, it was all Cleveland until the latter stages of garbage time in the fourth quarter.

Love scored 10 of the first 12 points of the game, with the Cavaliers jumping out to a 14-6 advantage. While the Clippers quickly reduced that deficit to four points, the Cavs just as quickly built it back up, never leading by less than seven.

That 10-point margin would be as close as Los Angeles would get for the remainder of the game, with a 32-22 game turning into a 45-28 contest in less than five minutes on the clock. The Cavaliers would continue to inch the lead up for the rest of the second quarter, with J.R. Smith and James helping close out the quarter by scoring the team’s final 12 points. Smith’s three with 10.9 seconds to go made it 65-42 at the half.

After the break, the Cavs put the game away, aided in part by a series of Clipper meltdowns that saw the team get assessed three separate technical fouls within the space of a minute. Then two minutes later, Los Angeles’ Matt Barnes was whistled for his second technical, which banished him from the game.

James said the Clippers’ issues at that point were not a big concern, “We just want to play basketball and not get involved in that.”

Despite only hitting one field goal in the first six minutes of the third quarter, Cleveland was able to increase its advantage to 26 at 80-54 after Timofey Mozgov split a pair of free throws.

Eventually, the Cavaliers boosted their lead to 32 on two occasions, the last after James connected on a pair of free throws with 3:22 left in the third that made it 91-59. Soon after, James was taken out to rest for Friday night against the Indiana Pacers.

Smith once again closed a quarter by hitting a three, this one coming with 27.9 seconds left in the third that made it 94-63.

With garbage time in full swing, the Cavaliers maintained their huge lead until the final minutes when the Clippers were able to chop the deficit down to 12, with the Cavs hitting no field goals in the final eight minutes.

That scoring drought led to Los Angeles putting together an 18-0 run that made it 102-90 with just over a minute left in the game before Mike Miller split a pair of free throws.

When asked how the rest of the league now views the Cavaliers, as opposed to a month ago, James was blunt, saying, “Not my concern. My concern is how I view what we do here.”

As noted earlier, Cleveland will now travel to Indiana for a 7 pm ET Friday night matchup before returning home to face the other Los Angeles team, the Lakers in a 3:30 pm ET nationally televised game on Sunday.